This chapter of the Tales of Yurt Power, is about the Two storey yurt which we built a few years back on the Canvas Chic campsite. 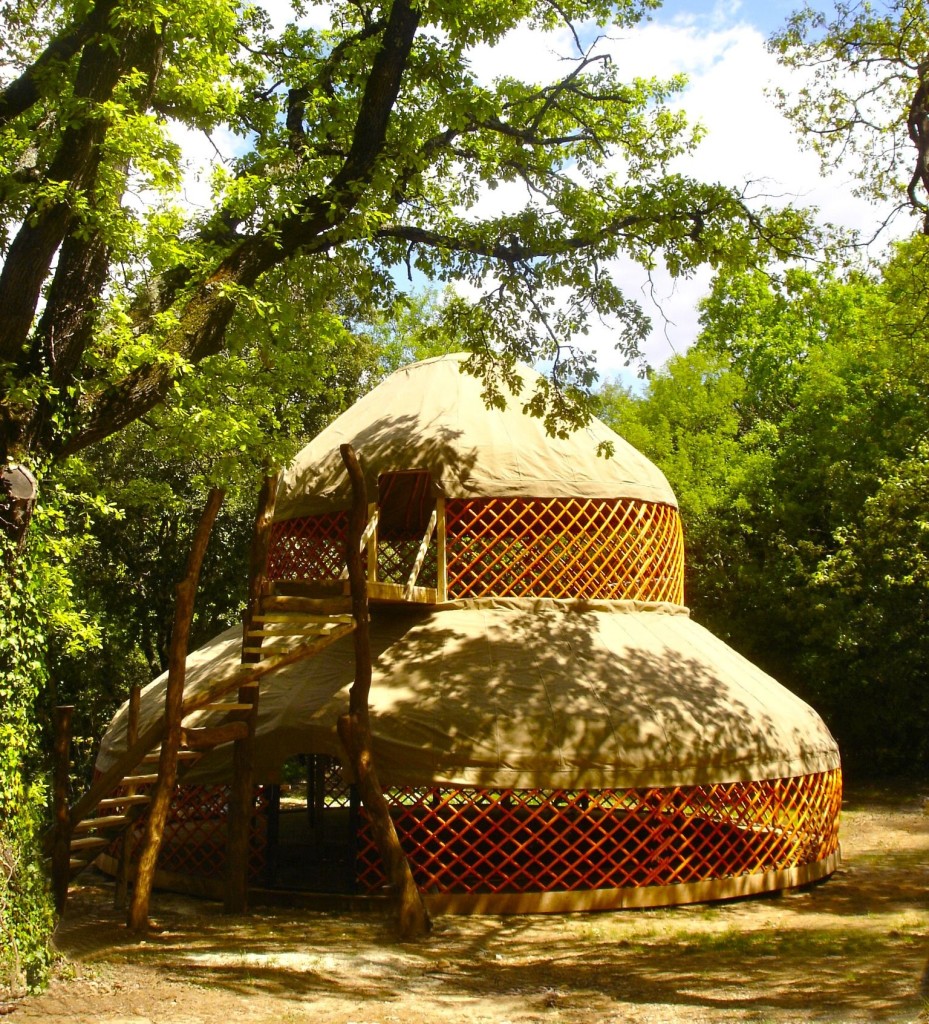 …a good place to begin this story is when I went to Canvas Chic in the Ardeche region of France to open the doors on all their yurt covers.

Canvas Chic was one of the original yurt campsites, in fact they probably coined the word ‘glamping’, and was situated in a beautiful green (Mediteranean) oak forest on the edge of the Ardeche gorge, with its magical prehistoric caves, rushing river and free roaming wild boar. (I say ‘was’ because not long after we were there, the owners sold the site and took the name ‘Canvas Chic’ with them, leaving their name ‘Milles Etoiles’ (a thousand stars) for the new owners). 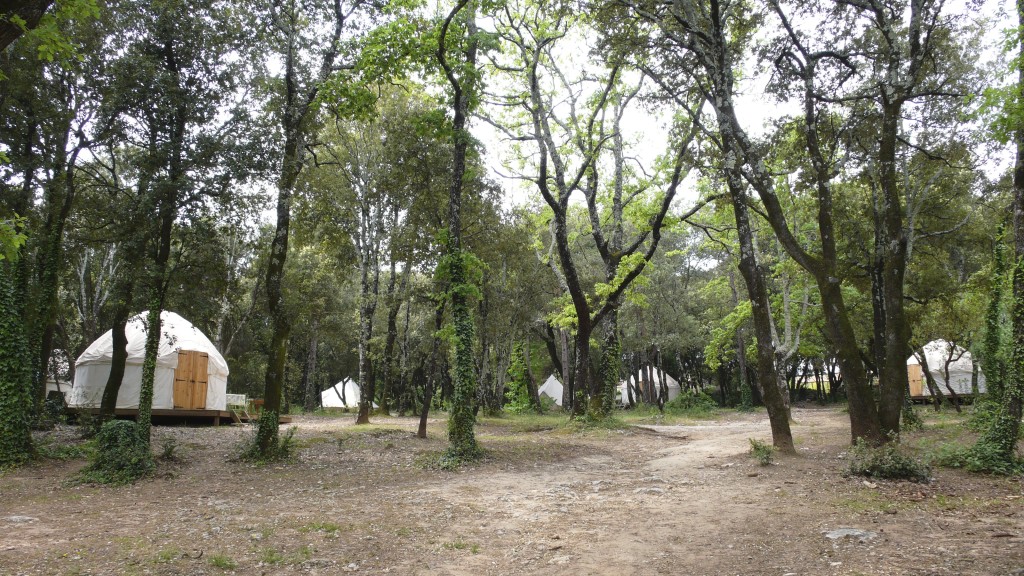 The ‘opening the doors’ task was so called because they had bought new wooden doors for all their 14 yurts, which were bigger than the old ones, so the canvas needed opening up at the doors.

Some time later, when we were on the road in our nomadic workshop, we were called to Canvas Chic to make a cover for their terrace, which evolved into to a Turkish Pole Tunnel Tent using bent chestnut rafters, going into an oak ridge pole. 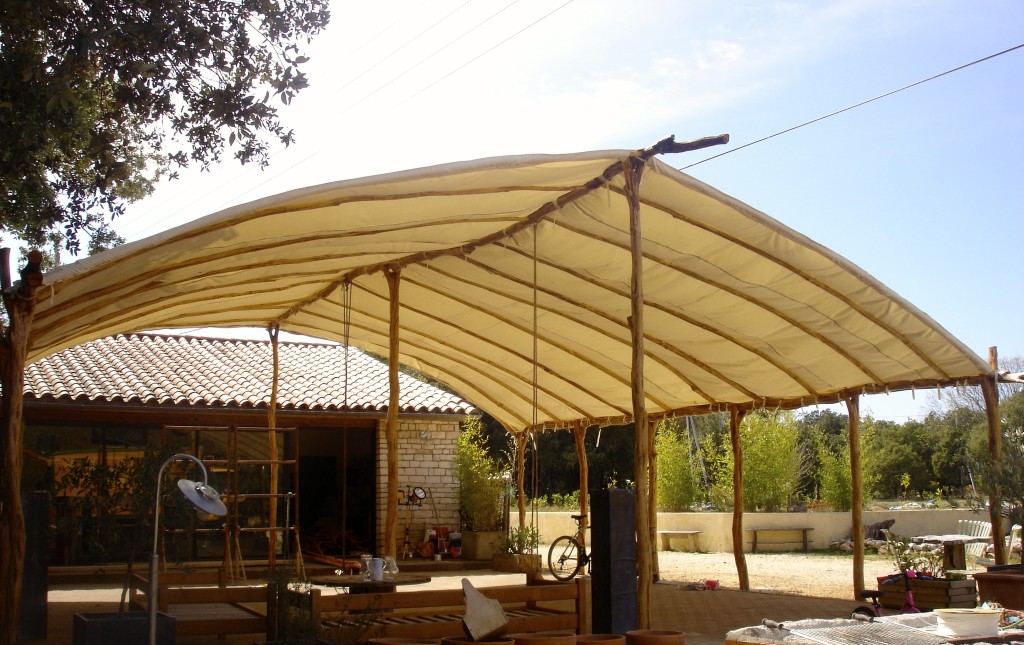 But how to do it…? When we were wondering how to make the frame, we heard about a French yurt maker who had bought a few Kyrgyz yurt frames with the idea to make a yurt-related structure, but had decided to take his family on the road in a horse-drawn wagon, so was selling the components. We worked out that by cutting some of the roof rafters down, magically it was exactly what we needed for the two-storey yurt frame, and one other yurt (but that’s second story). The Kyrgyz make their frames from willow by hand, shaping the components with a toothed draw knife, which are then coloured with an orange-red dye. 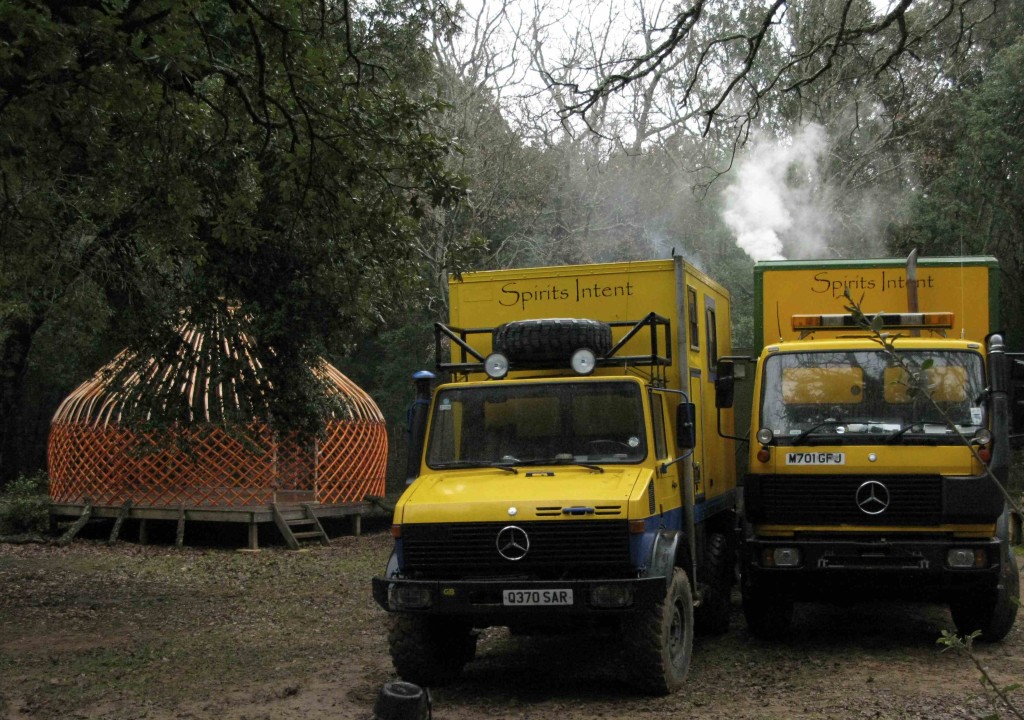 We weren’t so into a central pillar or an internal staircase as they would block the space, so the fixed deck for the top 20’ yurt sits on 8 pillars, with a side supports held by lots of metal. The rim of this deck then acts as a big wheel for the lower 30’ yurt. The staircase became an outside spirally one. 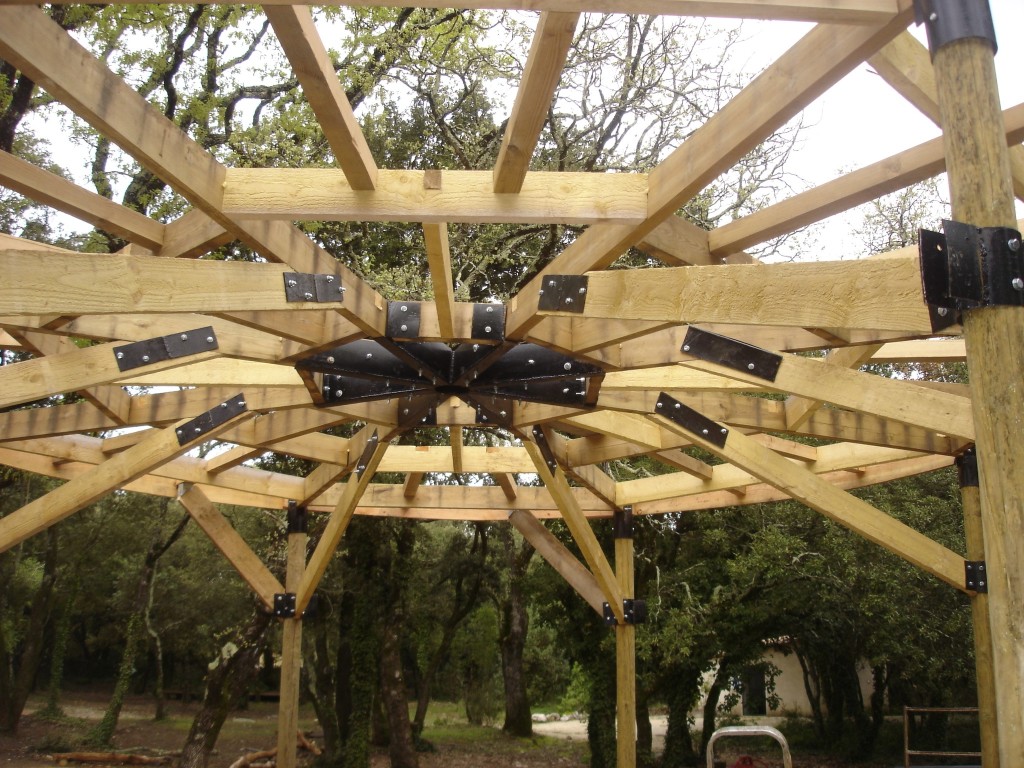 There was a willing group of volunteers who helped with the building process, which involved being transformed through the up cycling of an industrial stove for the metal of the deck (and conscious cooking). 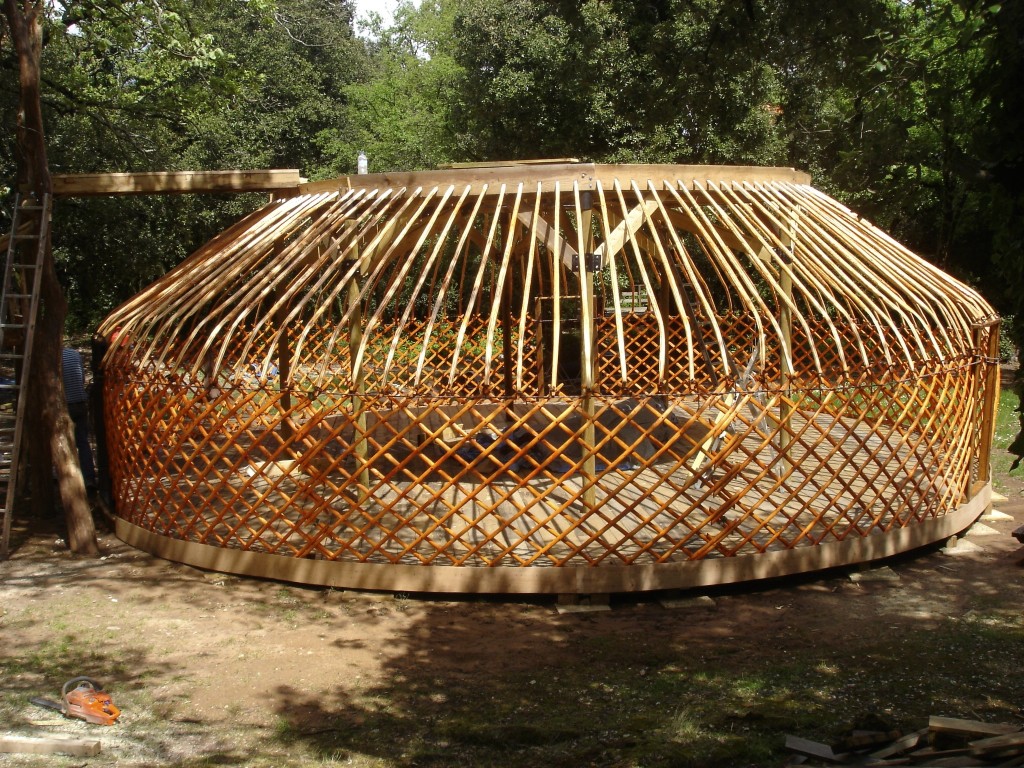 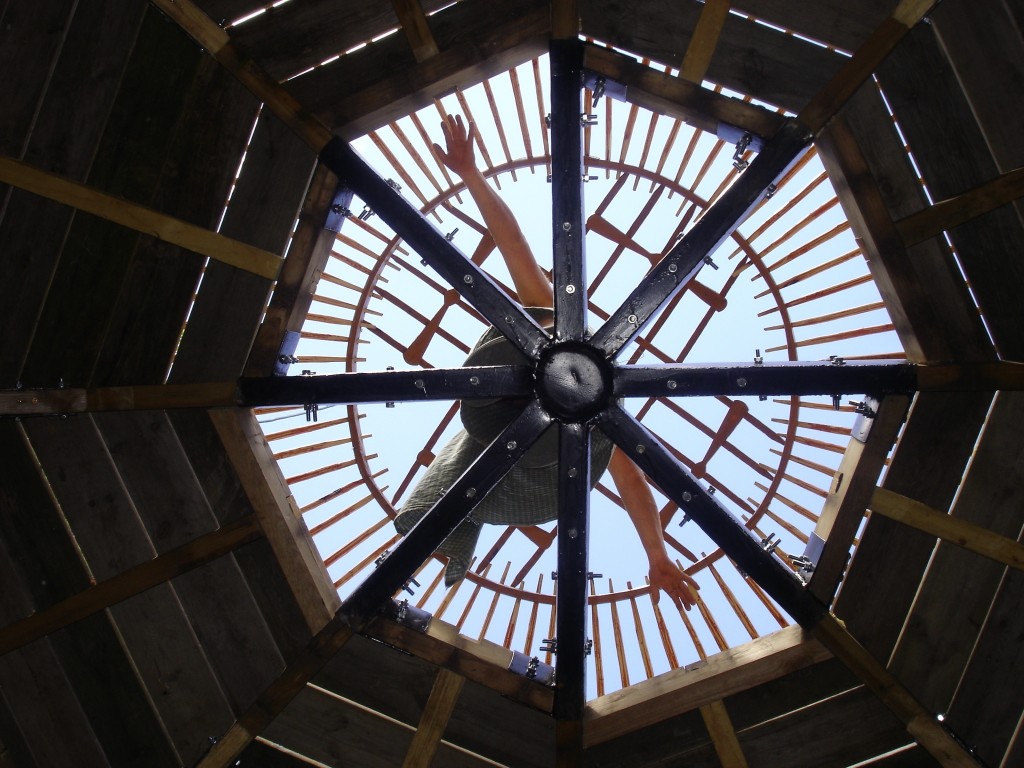 Looking up from bottom yurt

We thought it was going to be quite a job to put the top yurt cover and frame up, but it ended up being relatively simple, by doing it inside-out instead of outside-in. (Those who have ever erected a yurt will know what I mean).

The two-storey yurt was finished in time for the first Yurt Makers Conference Gathering, where yurt makers and experts came from all over the world to play, vision and eat a lot. 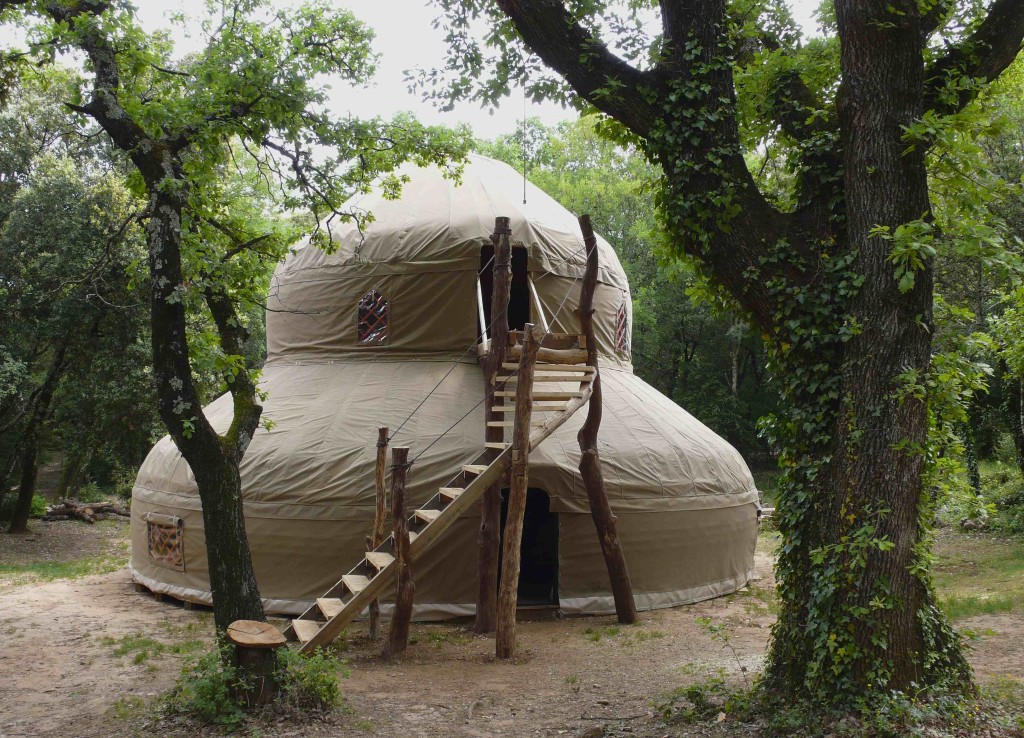 Our aim is to encourage more campsites to incorporate a tent palace at the centre to bring the people closer to a tribal feeling: the the true magic underlying the campsite experience, where a group of people come out of their separate lives, live in nomadic shelters and get a feel of the group mnd.

One thought on “Tales of Yurt Power: Two Storey Yurt”