The things that people ask me at first is ‘ Why do you live in a yurt?’ Closely followed by…. ‘What’s it like?’

Well, first let me introduce myself.

We used to live in a nice house in Bristol, UK and realised that we were missing the children’s childhoods and working too hard to pay for it all.

One day, Mike suggested that we sell the house and travel round the world. I thought he was joking at first. Within a few months we sold the house, took the children out of school and set off with a one-way ticket on the trip of a lifetime. 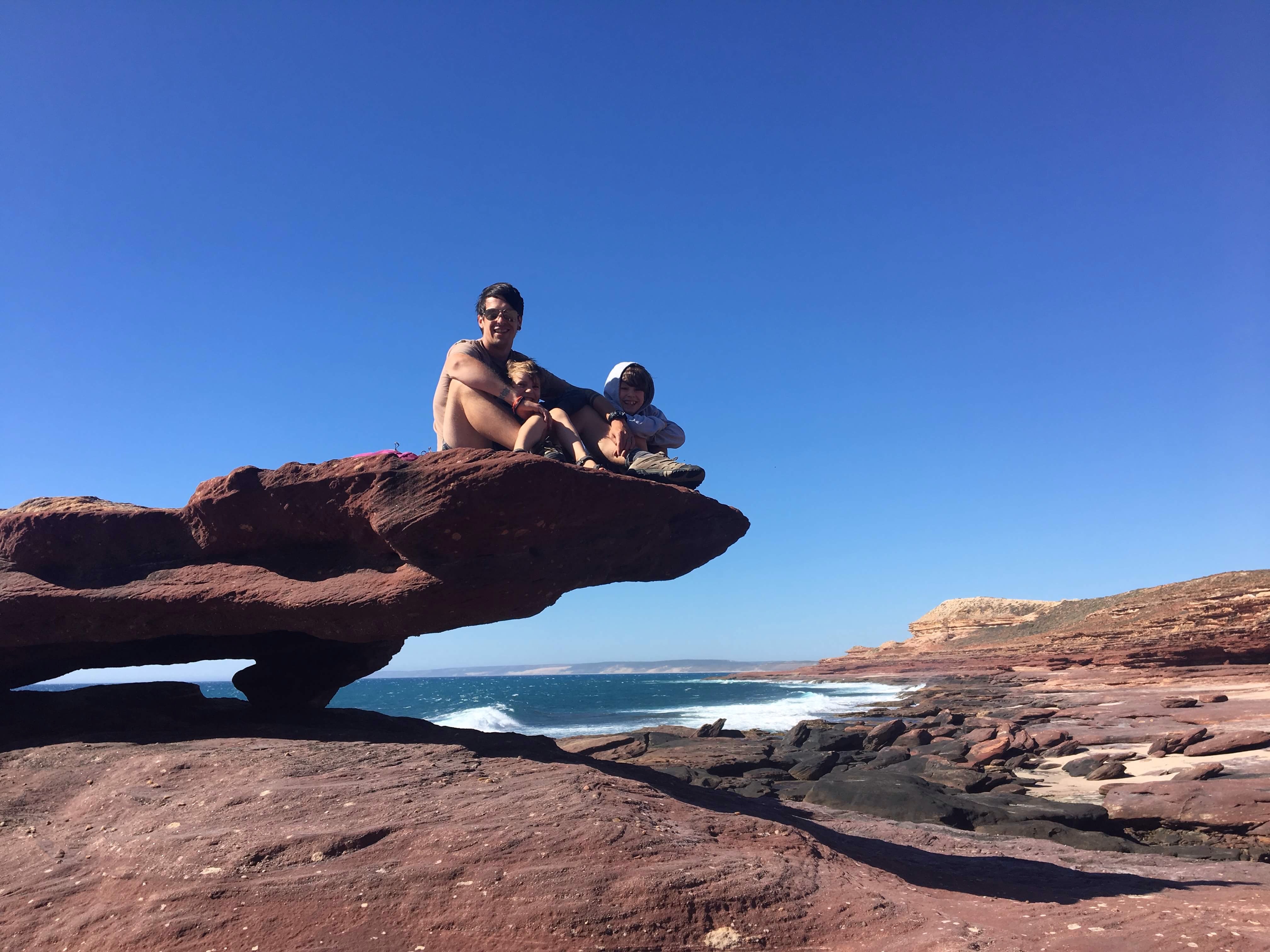 On 2 October 2015 we flew to Indonesia and made our way around South East Asia, employing a strategy called ‘World schooling’ where children lead their education, sparked by curiosity of the world around them. We climbed mountains in the Himalayas and snorkelled with sharks in Belize. We scaled the Grand Canyon and camped on a beach amongst wild kangaroos in Australia. 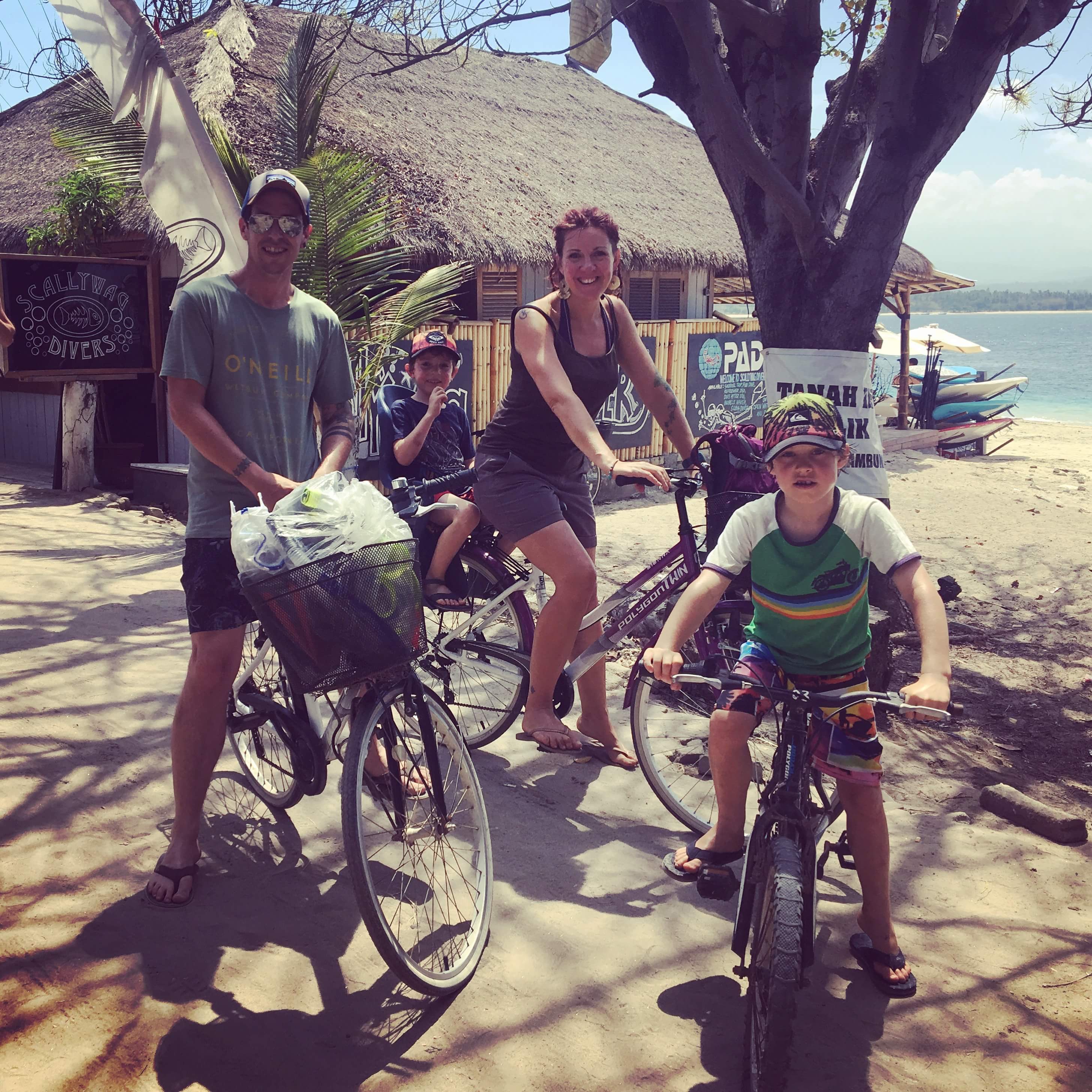 Our trip was immense, hard work and awesome in every sense of the word. Increasingly though, our thoughts turned to when- and if, we should return home. We missed our family and friends and being part of a community. Most of all we DIDN’T want to fall back into the trap of working to pay bills again. Old friends of ours had a smallholding in Wales with a few acres to spare. For years they had suggested we come and live on their mountain. We skyped them from our beach hut and apparently they were serious. We’d split utility bills and the field was ours, if we wanted it.

We looked at converting one of their barns, craning in a container… but we had always loved camping and yurt holidays. Having spent over a year living in the same room and out of 2 backpacks, a yurt would feel palatial.

Mike set about researching yurts and we joined some Facebook groups to talk to people and get an idea of what we’d need to live fairly comfortably. With friends in the festival trade, installing infrastructure into our field was no problem so we focussed on what we needed from the yurt:

Oh, and we wanted an ‘indoor’ toilet.

We ordered our 22’ Turkmen Yurt from Spirits Intent and that was our decision made. Updates on their Facebook page were exciting as we could see our new home being built from the other side of the world. 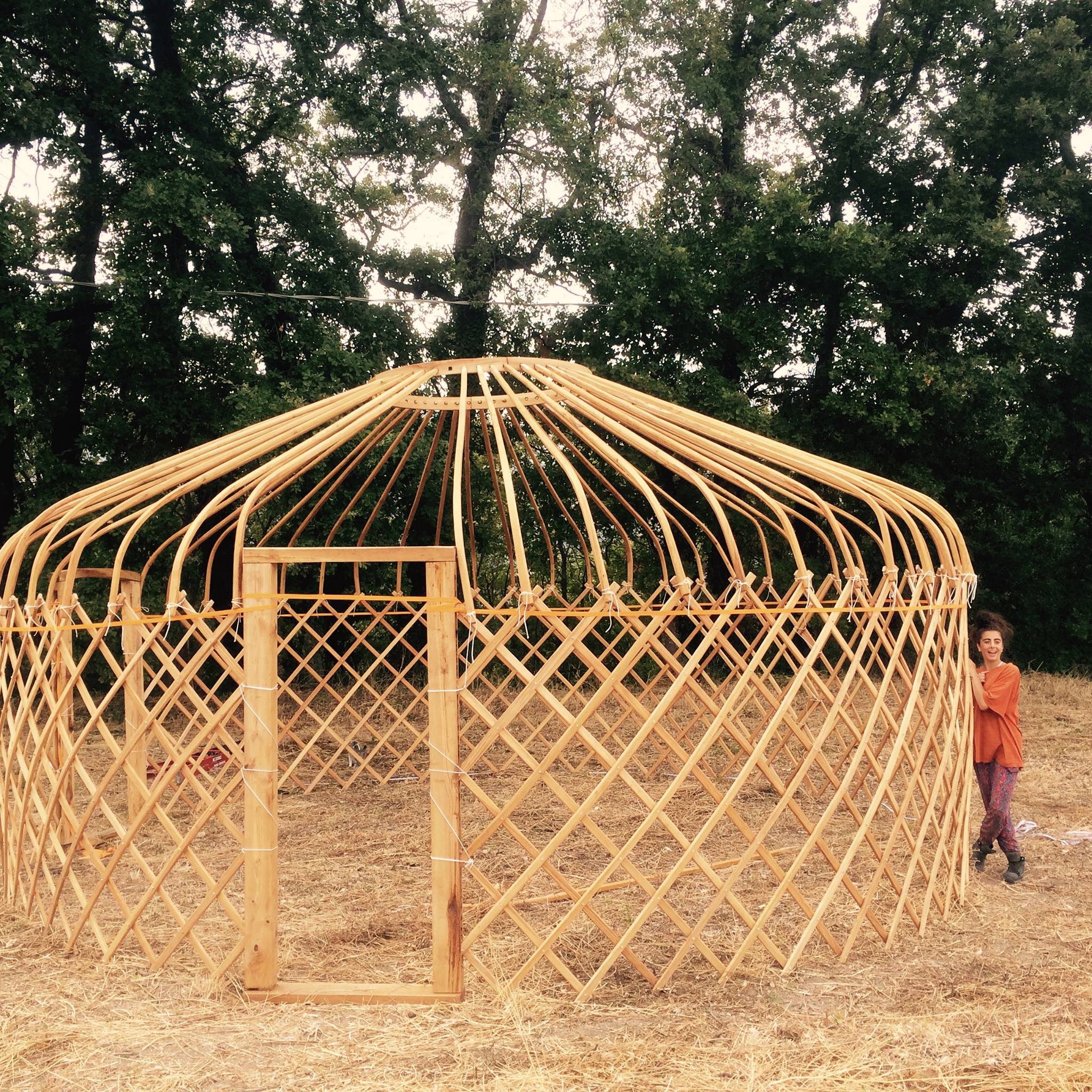 Mike was clever enough to bag himself a job when we were in Guatemala, so we had a deadline for the yurt build. We had to be moved in so he could start work on the 4 December 2017. After a whirlwind of reunions with our friends and family, we took ourselves to mid Wales on the 24 November as the weather forecast was… ok…We had been chasing the sun for 14 months and I think we had forgotten how harsh British weather could be. Anyway, this was Wales and we needed somewhere to live so we had to get on with it.

Nitsan from Spirits Intent arrived at our friends’ house, hungry and serious. He had been building our yurt with some volunteers and had come to stay the night before- sleeping in his van, to brace us for the hard work that was to come on Build Day. I felt sick with nerves as I heard the wind and rain battering at the house windows. I think the weather forecast for an‘ok’ day might have been optimistic. The whole family pitched in. We tried to ignore the hailstorm and Nitsan showed the youngest how to do a sun dance. Oddly, it seemed to work a bit even just to lighten the mood as we got battered by chunks of ice being hurled at us from the sky.

The trellis was up, the doors and rafters tentatively slid into place. We stopped to warm up with soup and I realise I had lost sensation in most of my body due to the numbing cold. We piled on the layers and the children decided to stay indoors after the rest of it (I couldn’t blame them)

We knew we’d start to lose daylight at about 3pm. So we hurriedly put up the felt insulation and lifted the canvas on with the last ounce of strength we had in us. Tying the fabric to the lattice was painfully slow as I had to cling to the edge of raised platform whilst my hands were frozen by the cold. Nitsan’s rallies of positivity were soothing, as our energy fell to its lowest ebb.

Then, all of a sudden, despite every sort of weather that the Welsh mountainside could throw at us, we had a yurt.

We were soaking wet and exhausted but we had a home all of our own. We waved Nitsan an emotional goodbye, as our team disbanded- the hard work cementing a bond between us.

For the next couple of weeks we worked at sanding the floors, putting in the filtered water, installing a gas boiler, hooking up electric, building a kitchen, digging drainage ditches and laying pathways… lastly we brought in our furniture.

The day we moved in our furniture a blizzard came and covered everything in 6 inches of snow. We slept and woke up to a world that was like Narnia. 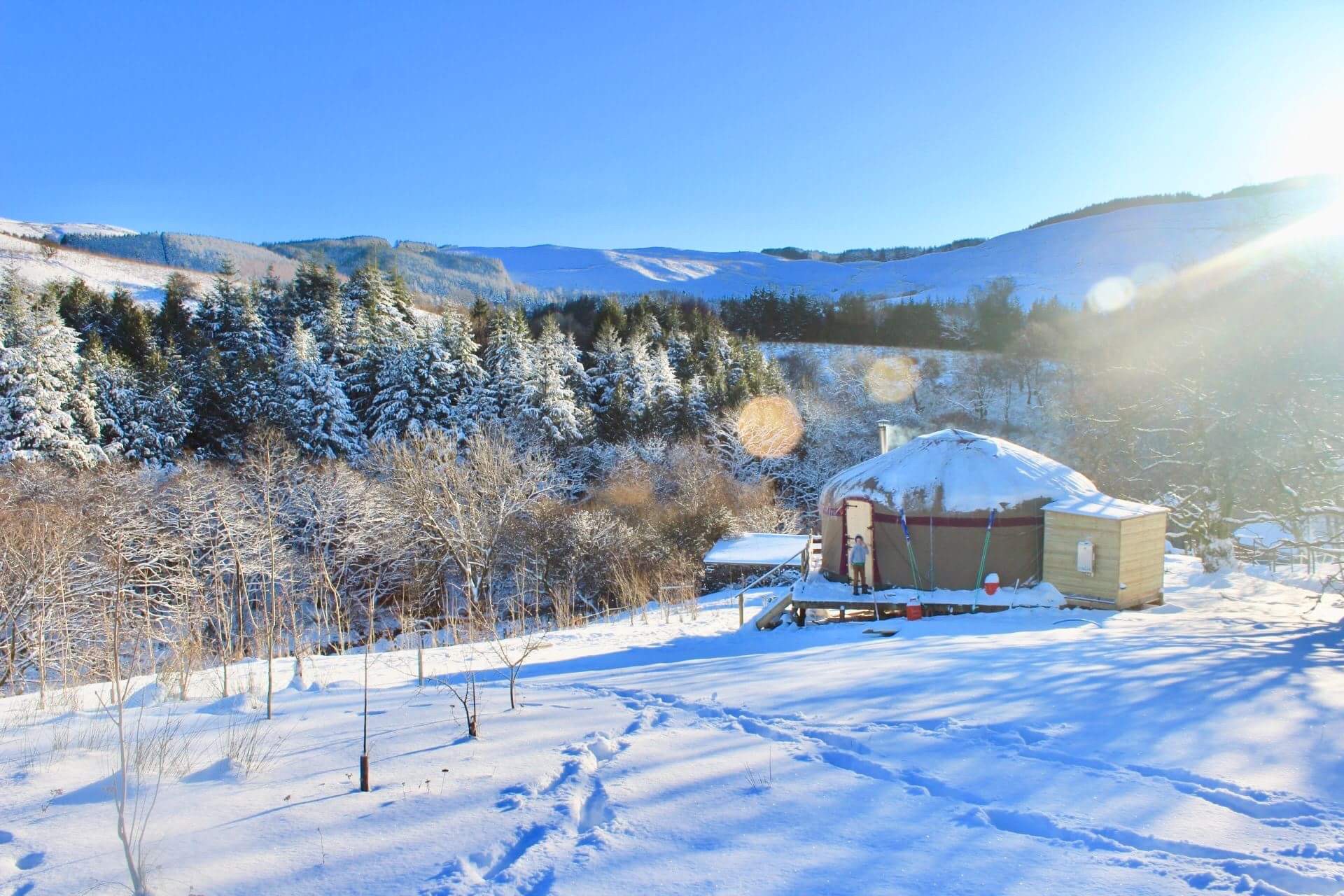 It looked beautiful but the reality was hard work. The first night the canvas dripped in multiple places as the seams had not had a chance to bed in…. the children were frozen from playing but it was hard to keep them dry and warm. We had no toilet, running water or drainage and icy drops of water falling on our faces when we were in bed. 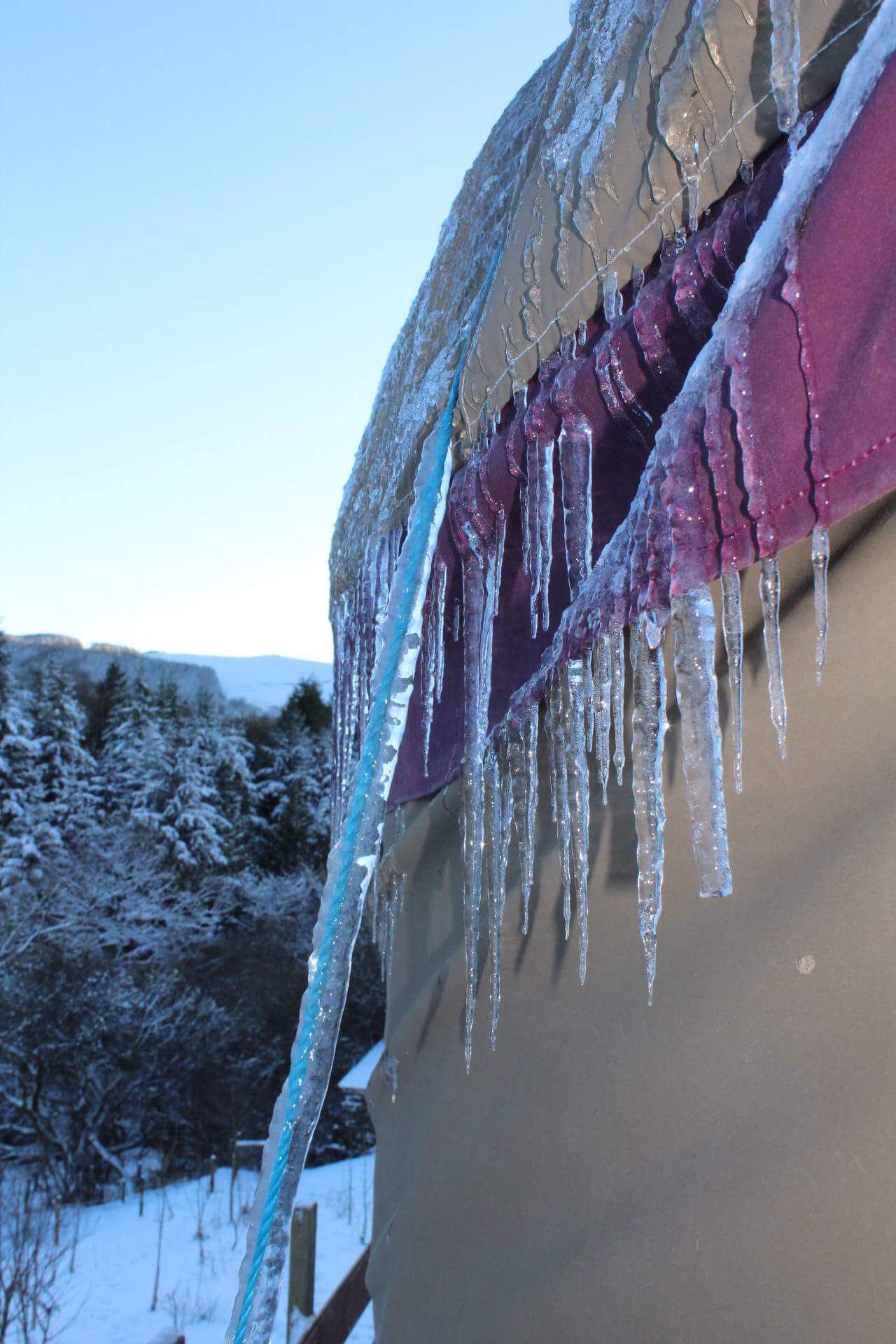 After the blizzard though, normal Winter feels easy! We have learnt our lessons, dried out, and are enjoying nature as we fall asleep to flicker of the fire, the sound of the river and Barn Owls calling along the valley.

We have found a rhythm and have learnt that with this life, you can take nothing for granted. We wake and start the fire. We have learnt to shower in the evenings when the yurt is warmest and appreciate that hot running water fresh from a mountain spring is a beautiful kind of sorcery. We keep the woodpile well stocked and keep muddy boots by the door. We have very warm duvets and wear lots of layers. We use ratchet straps to tie down the yurt as 80mph winds are quite common here. We empty the composting toilet every week and we have found that the Ultrasonic pest deterrents really work. Yes, we have found droppings amongst our dinner plates and had whole bags of clothes eaten by mice! Never again.

The horses in the field next door come and bray to tell us when the weather is bad and we all enjoy being connected to our surroundings. 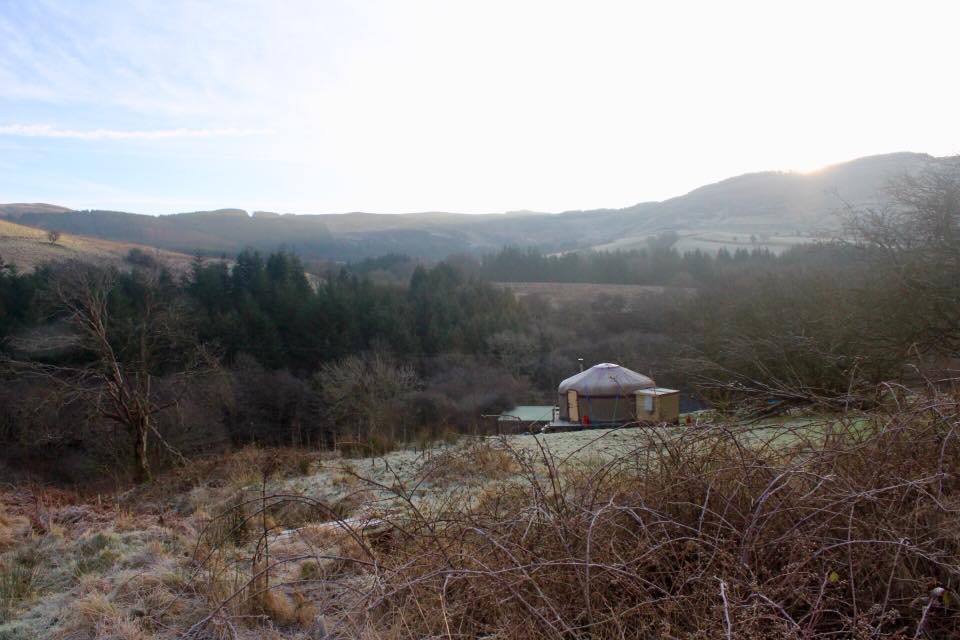 There isn’t a day that we don’t open the yurt door and have our breaths taken away at the sight of the mountains around us. Yes, it would be nice to have conveniences like ‘heating’ but the amount we’d have to sacrifice for that just isn’t a price we want to pay.

At the moment, anyway.

For more on this family adventure…see Wheelers on the Bus: Facebook page

And their lovely  Blog