Yurt Makers and their tools…

Everyone knows of the saw and the drill, but, unless you are a wood-worker, you may not have you heard of a Billhook, an Adze or a Draw Knife? 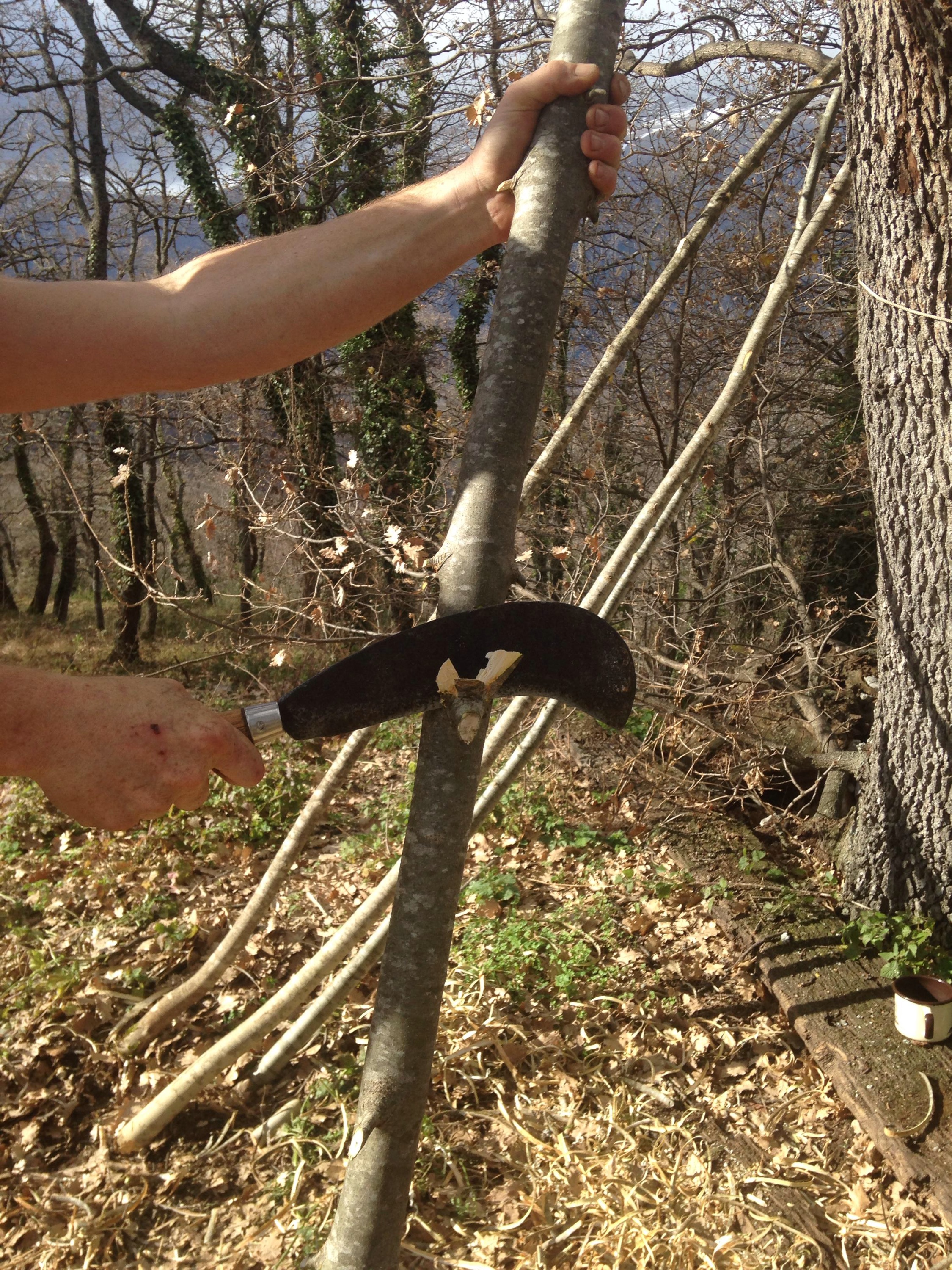 The Billhook is used by yurt makers to chop the small side branches off coppiced trees, and is also often used to chop back shrubby undergrowth.

I prefer a billhook to an axe for chopping small logs and kindling, maybe because the longer blade gives you more chance of striking the wood.

When making a coppiced yurt, yurt makers need to peel all those poles and a Draw Knife is the best tool for the job: much easier than a simple knife. It’s a flat blade which is held between two handles and pulled towards you, also great for peeling tipi poles. 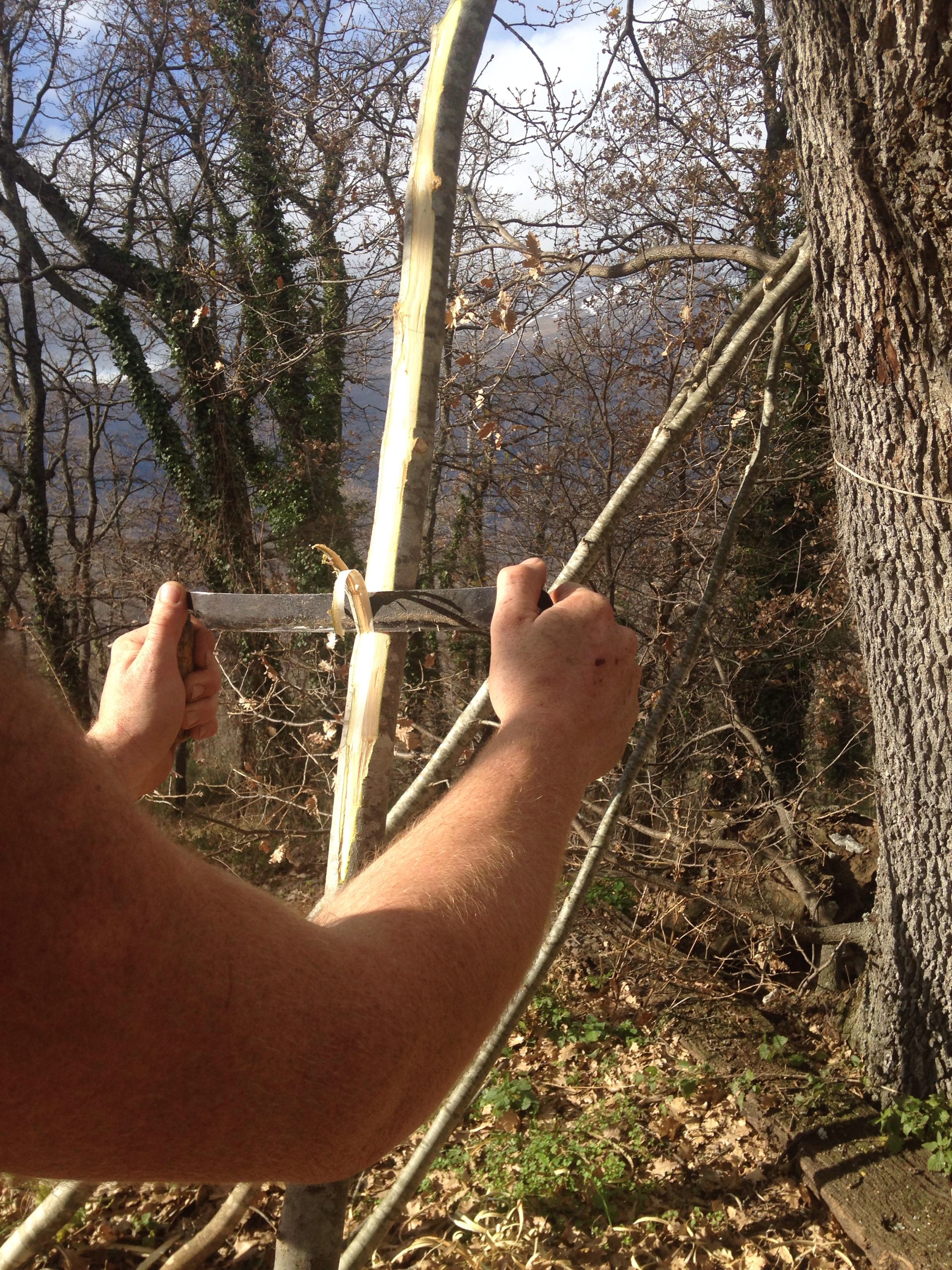 Our favourite draw knife is a really small, light one which we found many years ago in a tool stall in a market in Mostar, Bosnia.

For my first yurt frame, we cut a big ash tree then shaped the wood for the door and the wheel with an adze.
An adze is an ancient tool, similar to an axe but with the blade perpendicular to the shaft, like a garden hoe. A foot adze is usually held with both hands and swung between the legs, as you stand astride the wood.

It’s been some time since we started to make the Zodiac Tent starting with its central zome, and much water has passed under the bridge. It is a good time for us to go over the zome particulars again and remind ourselves of the geometry and wonder of this structure. Some mathematics coming…

The term ‘zome’, invented in 1968 by Steve Durkee, comes from ‘zonohedron’ and ‘dome’. A zonohedron is a polyhedron (a solid in three dimensions with flat faces, straight edges and sharp corners) where every face is a polygon (a flat shape made up of straight lines) with symmetry under rotations through 180°. ie the faces are the same if you rotate them by half a turn. For example: rhombus, square.

The zome structure is built around a series of double helixes, a helix being a spiral with constant diameter. The building block of life is the DNA double helix. 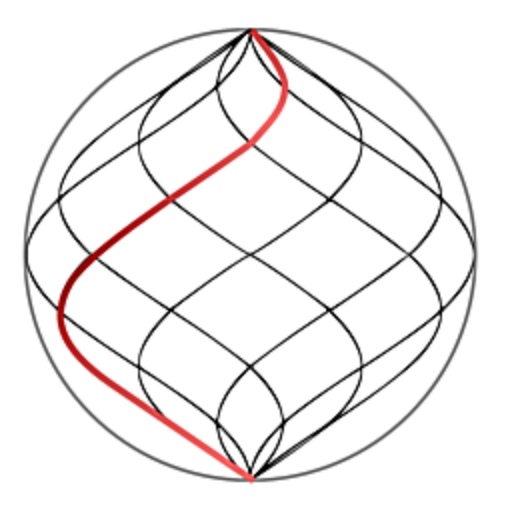 In the full zome cone each helix does a complete turn from the bottom to the top, and the top view is the Seed of Life, which, becomes the Flower of Life, when extended indefinitely. The Flower of Life is a sacred geometrical figure found all over the world.

There are (at least) two ways of constructing a zome: masculine and feminine.
In the masculine or polyhedral form, each half helix is split into n equal sections, making ‘n’ levels with straight struts of the same length in each level. The change in the angle which the struts make with the horizontal is constant between successive levels and this angle grows towards the top, so that the top struts are almost vertical. The vertical height of each layer is the same for all layers. The faces are rhombuses of differing sizes. (Diagrams thanks to Rene Muller). 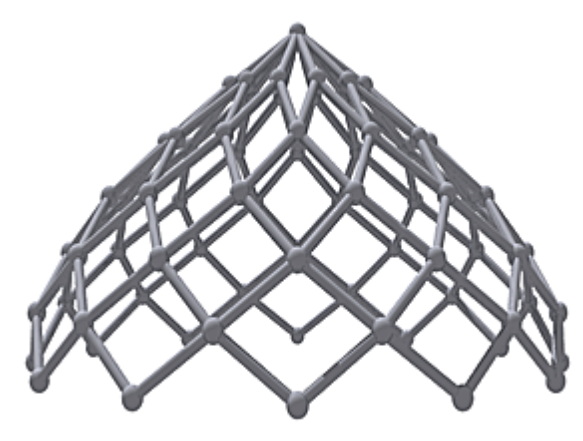 In the feminine version, invented by Nicolas Causse, each strut is a true half helix of constant curvature. 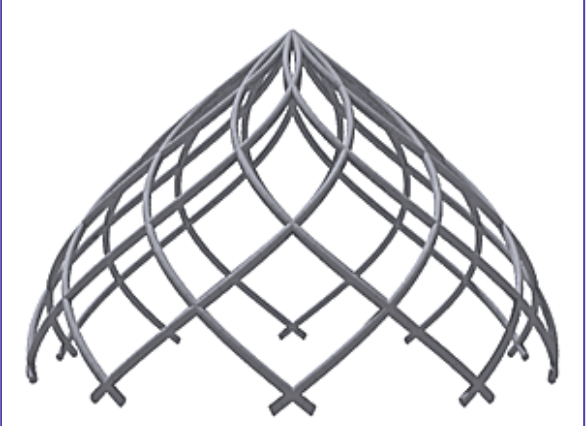 Our first zome is of the feminine kind with n=24, and looks like this.., 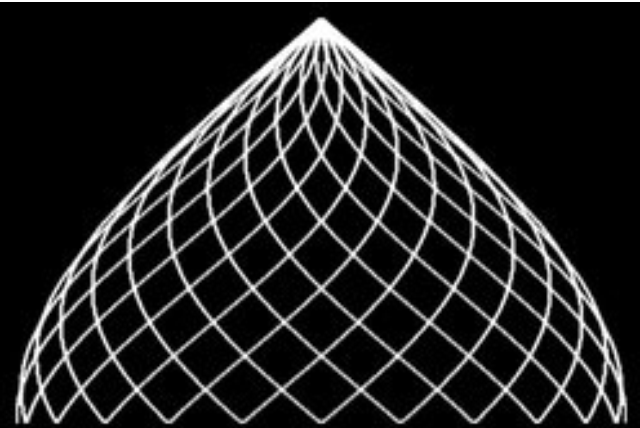 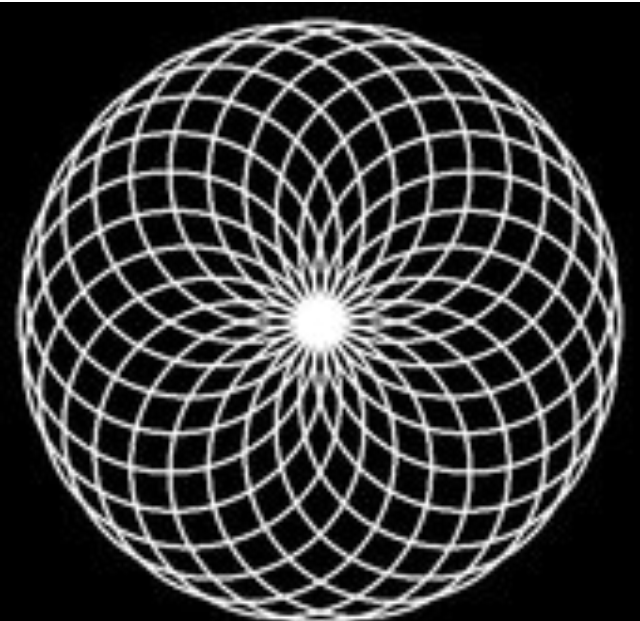 The struts therefore have both a curve and a twist with 2 kinds of struts: lefts and rights, ie clockwise and anti-clockwise twists. We make our struts with laminated layers of wood, clamped onto a specially made jig. Lefts on one diagonal, rights the other. 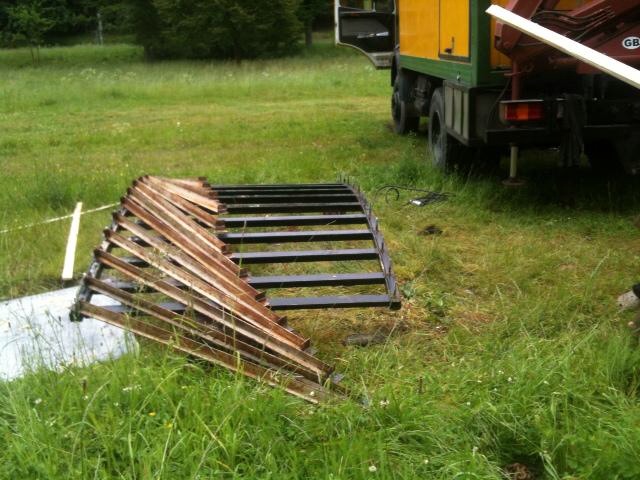 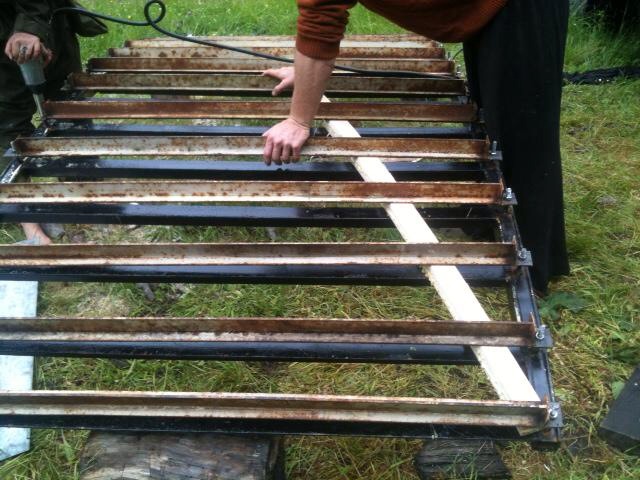 Be at home
In a zome

In the USA, Rob Bell, has taken the zome structure further in these magnificent temple sculptures, made up of plywood plates, for the Burning Man gathering. …

Zome is where the Art is. 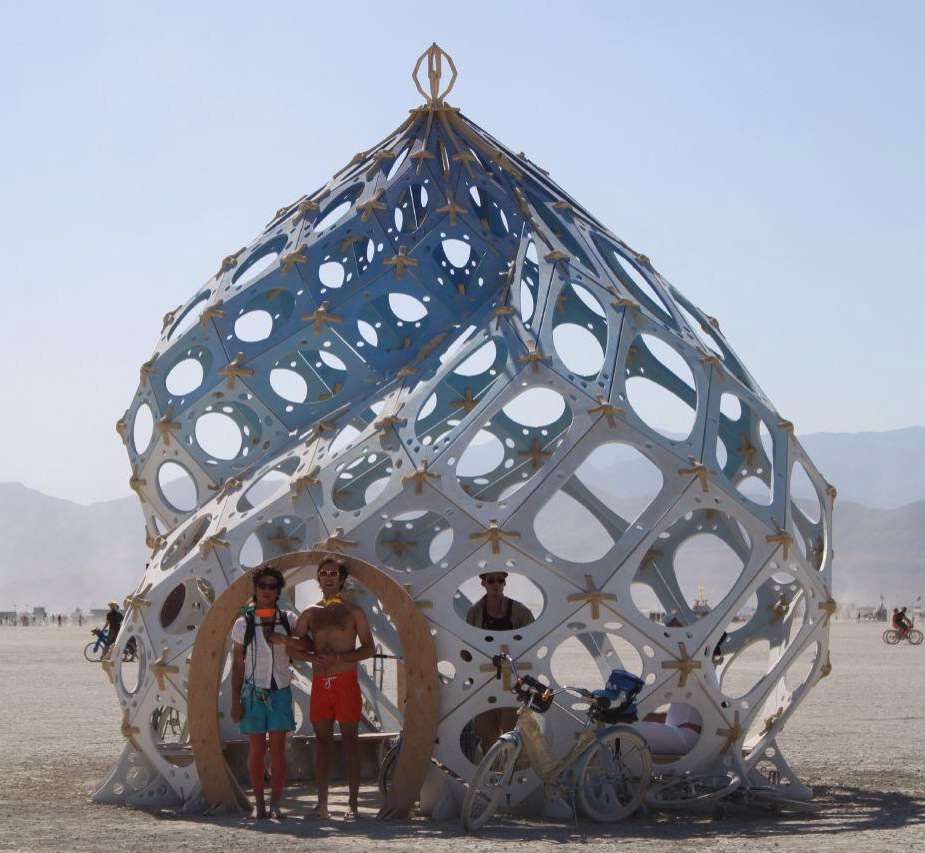 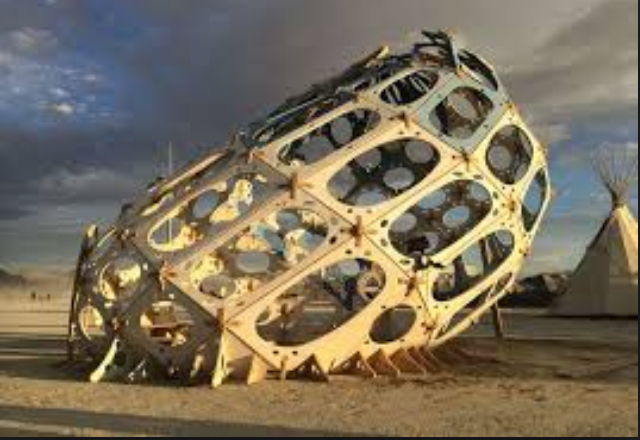 And here we have a model of The Zodiac Tent with the zome at its heart. 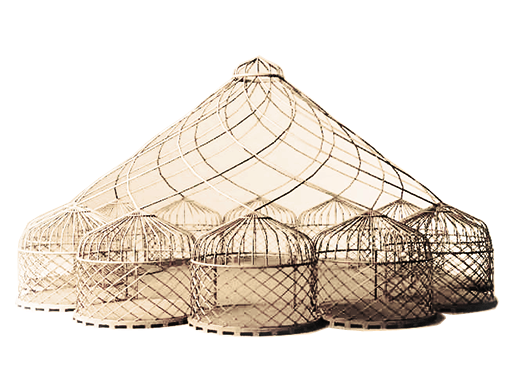 The zome in the zodiac tent 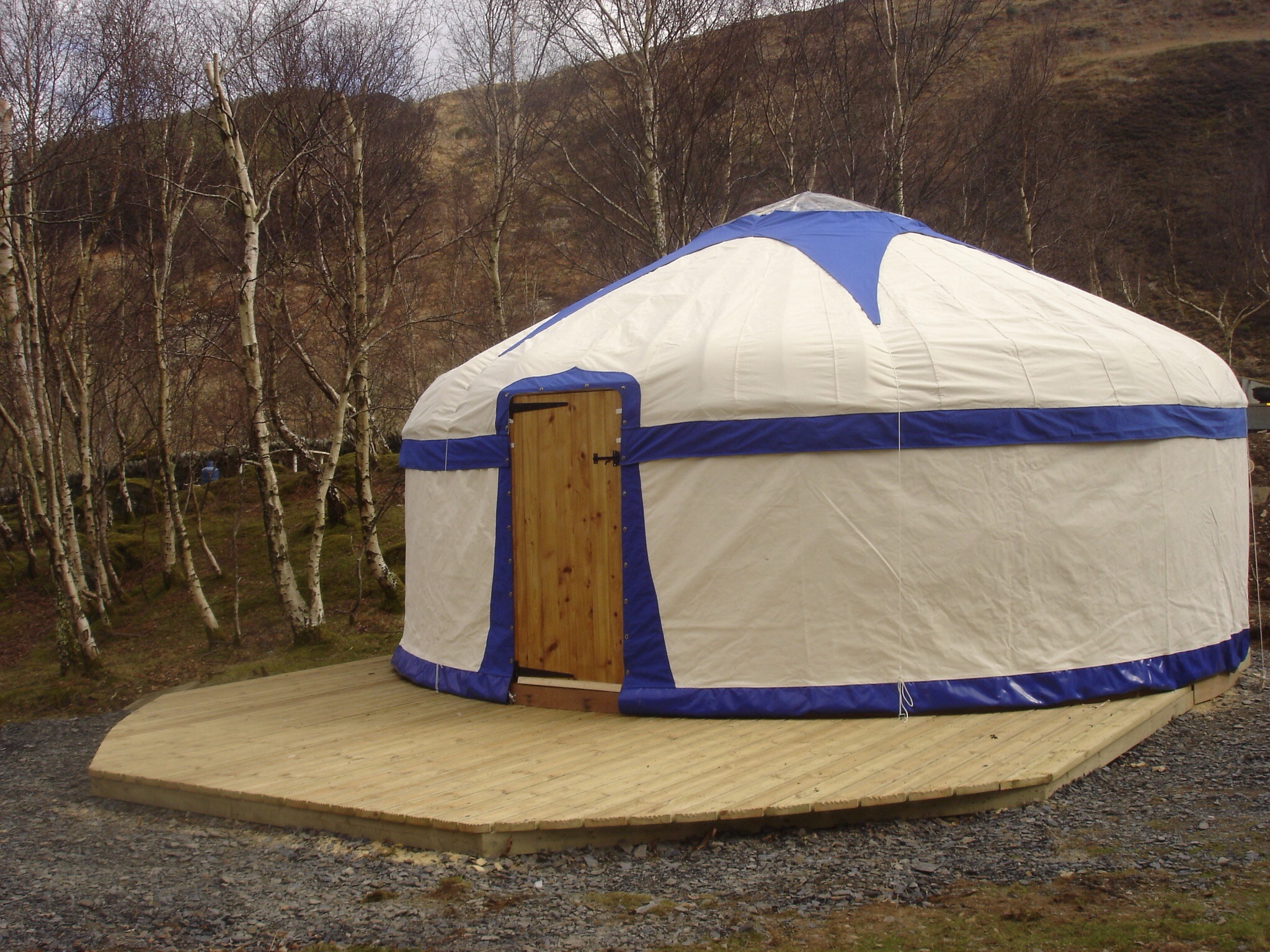 We have been sewing Yurt Covers in our way for many years and have never really written about how we do it and what makes us special. So here goes…

The main thing that makes us different from other yurt makers is that we usually make our yurt covers without seeing the frame. “So how do we do this”?, you may ask. Well it is a fine art that we have refined and fine tuned over the years, and have now made (literally) hundreds of canvas and felt yurt covers in this way.

It is an ancient recipe starting with a measurement sheet which we send to be completed by the yurt owner, with lots of clear instructions to ensure the process is idiot-proof (although there have been a few cases…). We then add lots of circle geometry, a bit of algebra, Pythagoras theorem and sometimes some trigonometry, before getting out our amazing Vietnamese scissors to start cutting the canvas, the webbing, the cord and all those little bits and pieces which make our yurt covers so delicious.

Top quality canvas is an important ingredient in the pot. We usually make our yurt covers from 12oz polycotton canvas which is flame, water and rot-proofed, and have worked with the UK’s canvas proofers to raise the ‘water head’ (level of water proofing).

And we make our yurt linings with a really snuggly wool felt.

We have two trusty sewing machines, both walking foots (feet?) which means that the heavy fabric is always held tight from slipping. One is a Durkopp-Adler, and the other a Seiko. The Durkopp is the Rolls Royce of sewing machines (which means a tiny screw can cost £75), and is fast, good for the long stretches. It can also sew through a surprising number of canvas layers. The Seiko is better for detailed work like windows and it is lighter to move around so is the one that usually goes out on missions.

Windows are nice in the yurt covers: as our late friend, Bill Coperthwaite used to say ‘there is something indescribable about the view through a round window’ and I would also recommend opening ones, which we used to do only rectangular, until we worked out that a round hole with a rectangular PVC opening bit was much easier and nicer etc

…and we like doing decorative details..it makes life interesting. 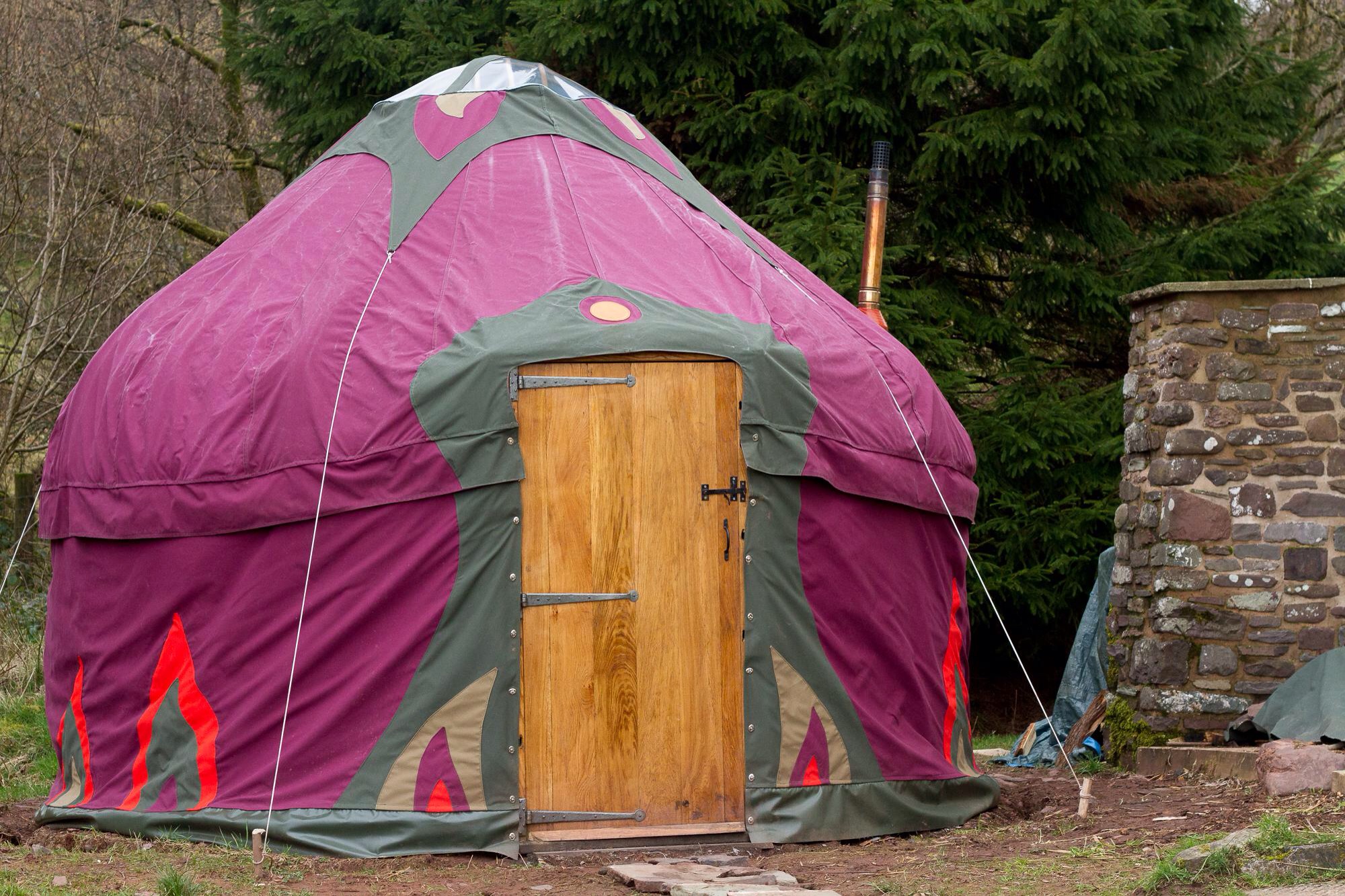 We decided a few years back that it was time to share our secrets with the world so we wrote ‘The Yurt Cover Sewing Course’ which reveals all tricks of our trade.

It is always a lovely moment when the cover is all packed in the bag, and ready to be picked up by our latest friendly courier. As we make our yurt covers at a distance, we don’t usually get to see them up, so it’s good when customers send us photos and feedback. We will always hear when something is wrong, but not always when things go right. It’s often a case of needing to hold the intent until we get the thumbs up. 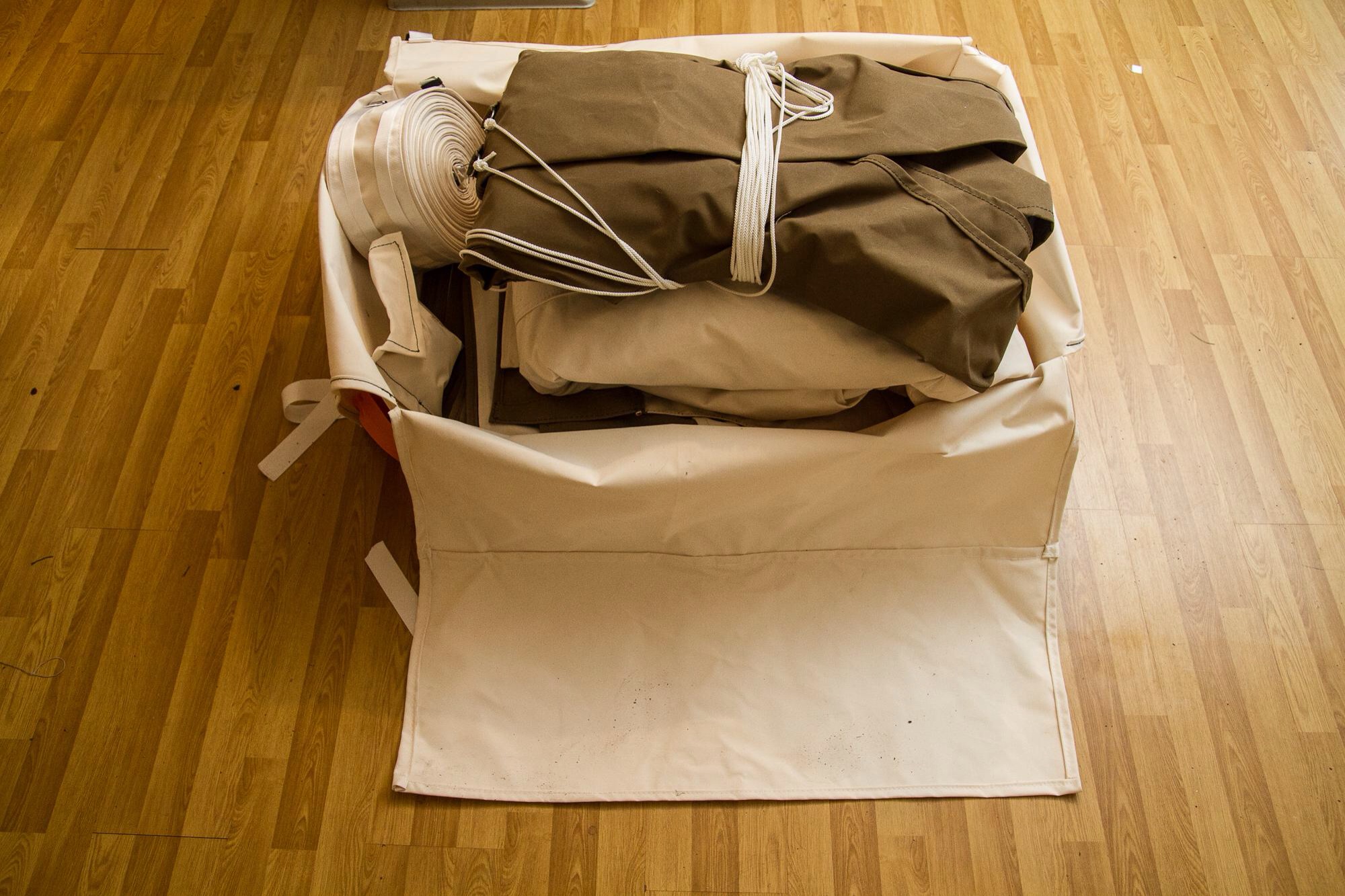 Now, once again the wild Easter sewing rush has begun, so we have sharpened the scissors and got our thimbles out to be ready for the storm….