We have explored the ancient motif of the heavenly mill and the axis in a recent post, today we are going to make an incision into the body of myth as a goddess, to perform a type of cesarean to help her deliver some of her ancient secrets.

Because our last mythical thread ended with a picture of the dragon and the heavenly mill, this is where we are going to re-enter the body of that ancient goddess. As you now know the mill motif portrays not only the rotation of the skies… 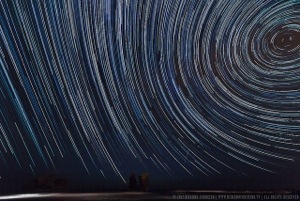 …but more so, to the ancients, the mill was a symbol for the motion that grinds out the ages. Let’s look into what that could mean (the idea of preceding ages) we need to go back a step and look at the Axis Mundi idea again, the still point that the world revolves around…….. the North Star.

As we now have an inclination that myth is portrayed through the Celestial tent of heavens (the night sky) we are going to explore that story in three places at once: one on this earth, one in the sky and one in the body of the myth goddess itself, in the medium of another mythological motif – the sea serpent/monster, the first goddess. 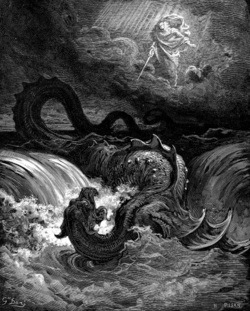 As our sky revolves around, it is seen to spin around the North Star: Polaris, in the constellation of Ursa Minor, the Little Bear.
But Polaris was not always our North Star – our ancient myth mother has known another North Star, Thuban, in the constellation Draco, the heavenly Dragon (starting to sound familiar?), and if it is not, think about the tree and snake in the garden of Eden, and the fall, or end of an age (the golden age?) symbolised by being thrown out of the garden.

It is easy to see the shift into a new age symbolised by a new type of governing body, when Ursula the Bear took over from Draco the dragon. 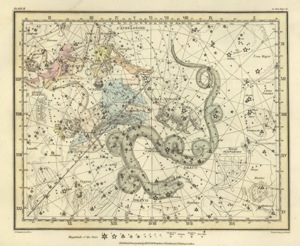 Now let us come back to earth from the lofty heights of Capella, on earth let us descend on Ancient Greece, and unto one of its most prominent sites: the oracle of Delphi.
The Greeks believed the navel of the world (Axis Mundi again?) was under a stone called the Omphalos (meaning navel) guarded by a mythical earth snake/dragon.

So we have the same story repeated on earth, on Greece’s most renowned oracle site, and mystery school (we may look at this later).

In the old myth, the god Apollo kills Python the guardian snake, leading us back to most ancient of goddesses.

To operate on her body we need to follow this motif, called Chaoskampf, the victory of a cultural hero over a monster – the dragon slayer myth. 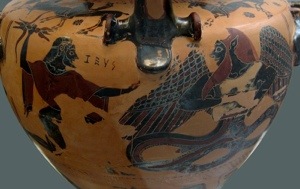 From Saint George and the dragon we can follow our mythical hero, the Thunder God, through the last 5000 years and watch his plight, and fight with the dragon of the deep (and Draco in the sky): Apollo kills Python (Greek), Baal fights Yam (Canaanite), Marduk and Tiamat (Babylonian).

In the Old Testament book of Job, there is a mention of the great sea monster Leviathan, apparently the same monster, called Lotan, that was associated with the god Yam (meaning sea). The Jewish Thunder God (we met him as Thor the 4×4 god remember? ) will kill the sea monster and would stretch its skin on the tent that houses the people at the end of days!!!
What a feast.
Wow we thought, this is literally a Job description!!!

Stretching the dragon skin over the tent, almost as good as the Kalevala’s description of the mill with a lid of many colours (we saw it as the cover of the tent of course).

As this project is about making the zodiac tent, we thought it is high time to bring forth the real drama (it is a form of transformational theatre venue after all) as portrayed on our myths and legends, and projected over our biggest screen (the sky itself), like a skin of a mythical dragon, to become apparent as a guiding script at the end of times.

What is that ancient script and what is the drama?
That would require a thread of its own.

For those of you that have read some of the other posts on this blog, we are going to go deeper by exploring some ancient symbols and myths. Some of you are familiar with the flower of life, but few realise that this ancient symbol usually comes together with another powerful (maybe more) symbol, in fact you may say they are a set.

As you can see in this picture, here we have the flower of life, and the seed of life, but at the bottom left we have something that is unexplainable: a whirl?

Those of you that been reading through the other posts, remember that this very beam is the one we happened to find in a museum on the way to the saw mill to cut the zome planks.

For those of you who are not interested in understanding the mystery, and do not believe there is some motivating force out there that is in fact in communication with us, better stop reading as we are going to go right into it!

To understand this whirl design, we have to go deeper into mythology than most of us are usually comfortable with, helped greatly by a book called Hamlet’s Mill, exploring the origins of human knowledge and its transmission through Myth, or at least that is its cover strap line. In fact it goes into the origin of myth itself, and talks about the commonality of certain creation myths from places around the world that should have had no connection with each other.

To cut the story short, it speaks about some motifs, and narrows all our myths to the motion of the Heavens. Our Gods are the planets, the moving force. The realm of destiny or fate – the fixed abode, is the celestial sphere itself, the fixed stars. 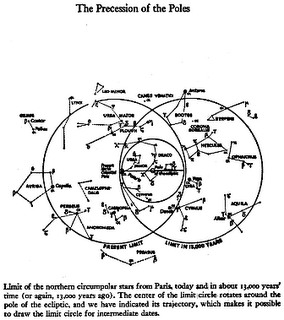 The precession of the poles

Another motif that seems to be part of some of our most ancient myths, is the World Mill (or Heavenly Mill), a type of heavenly grind stone that grinds out the ages. One good example of this, the Sampo, is in the Finnish epic poem, The Kalevala. You may remember the post about the Zodiac Tent cover, so you understand how delightful for us it was to find out that the Sampo, had a lid of many colours

If you can imagine our earliest ancestors looking at the sky, it is not hard to understand that through the ages they would note, that not only the sky whirls every night of the year, it also spins on a tilt creating a greater cycler, which could be seen as a Great Year, a circular motion that could be seen to grind the ages. The two symbols the Mill of Heaven and the Flower of Life are aspects of the same subject, a phenomena that has a centre in the sky.

Before we go into the next layer, lets see a few examples of the same pair, the flower and the Mill. 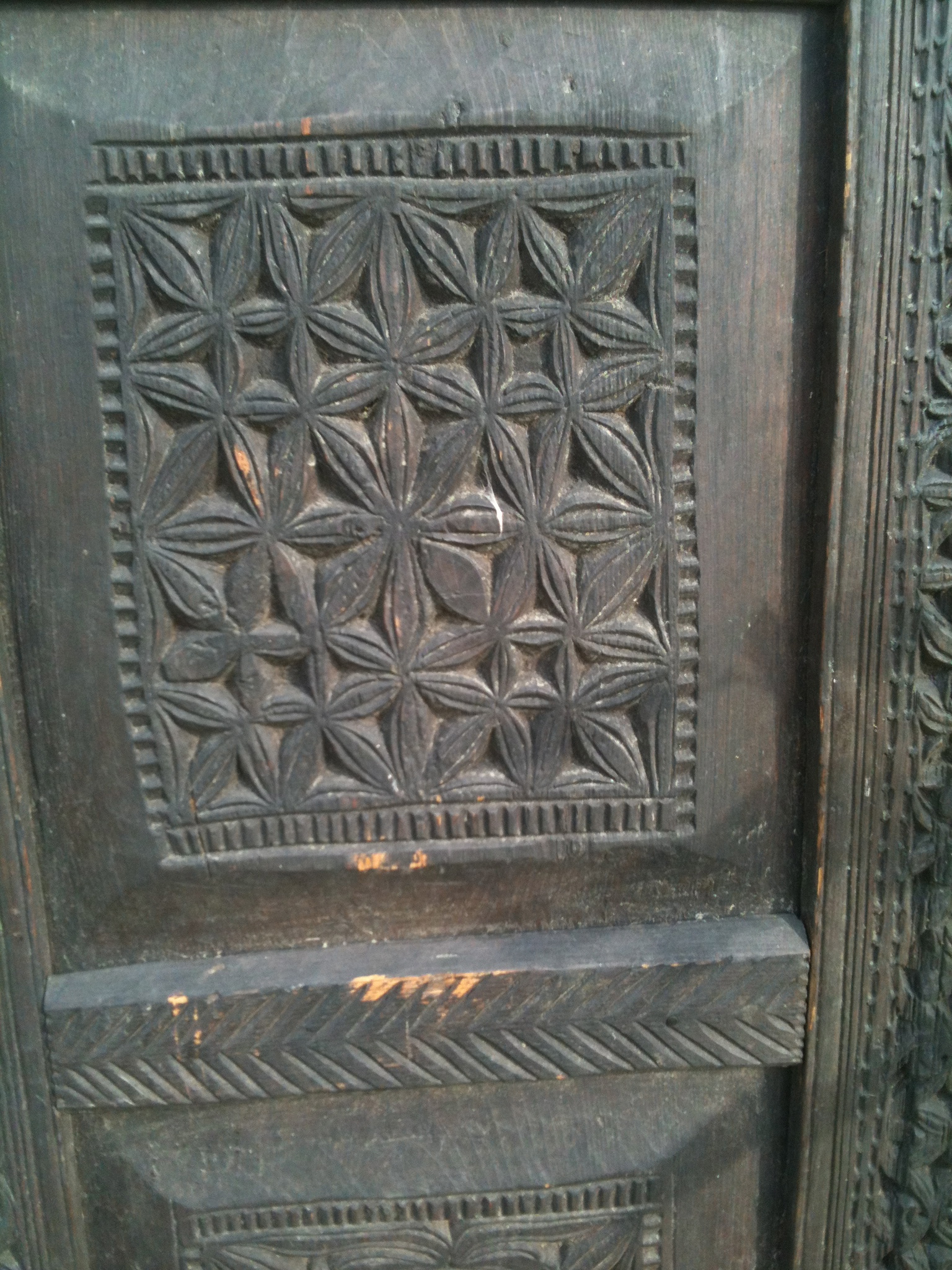 Flower of Life on Indian door, now used as a yurt door 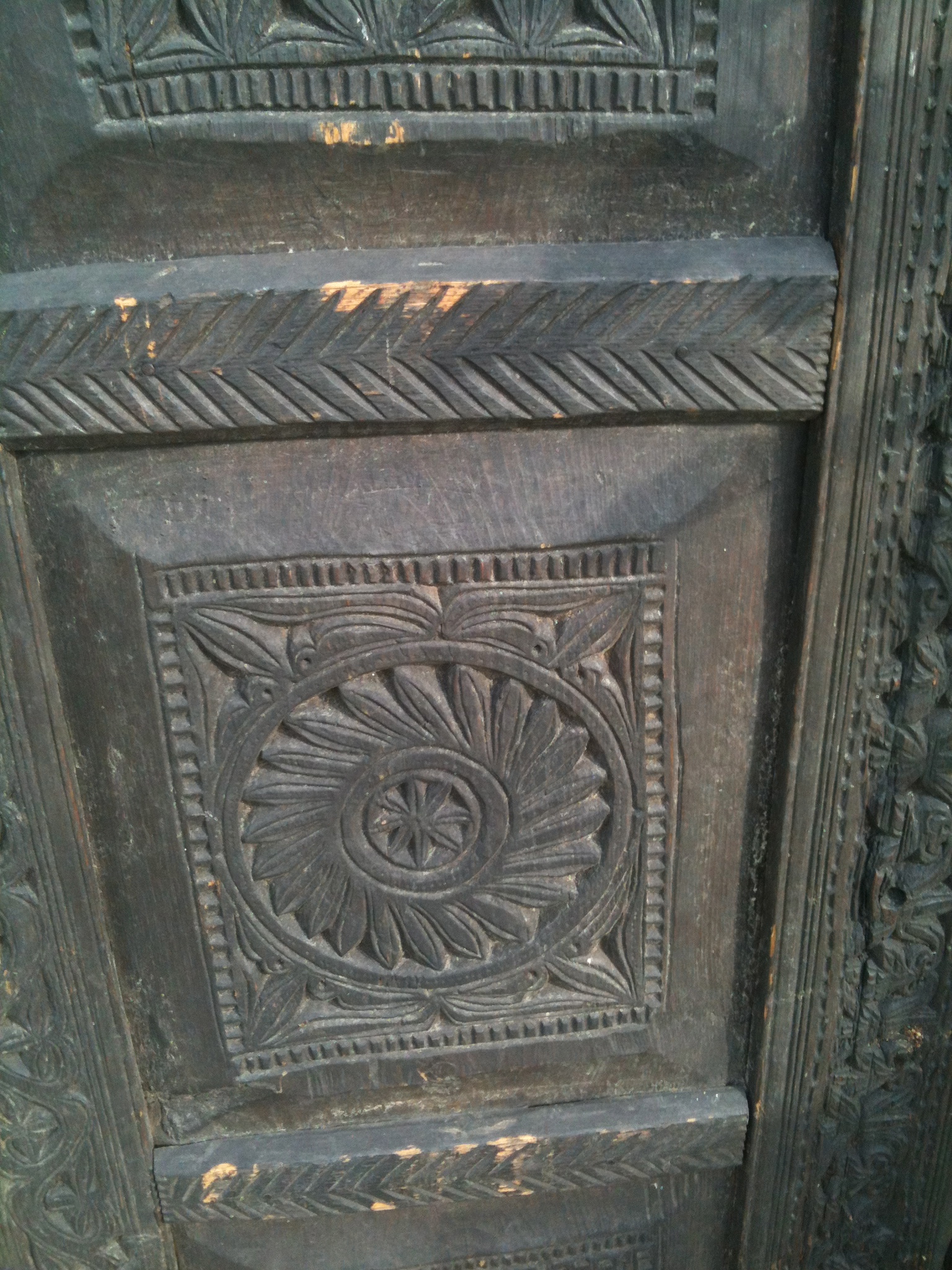 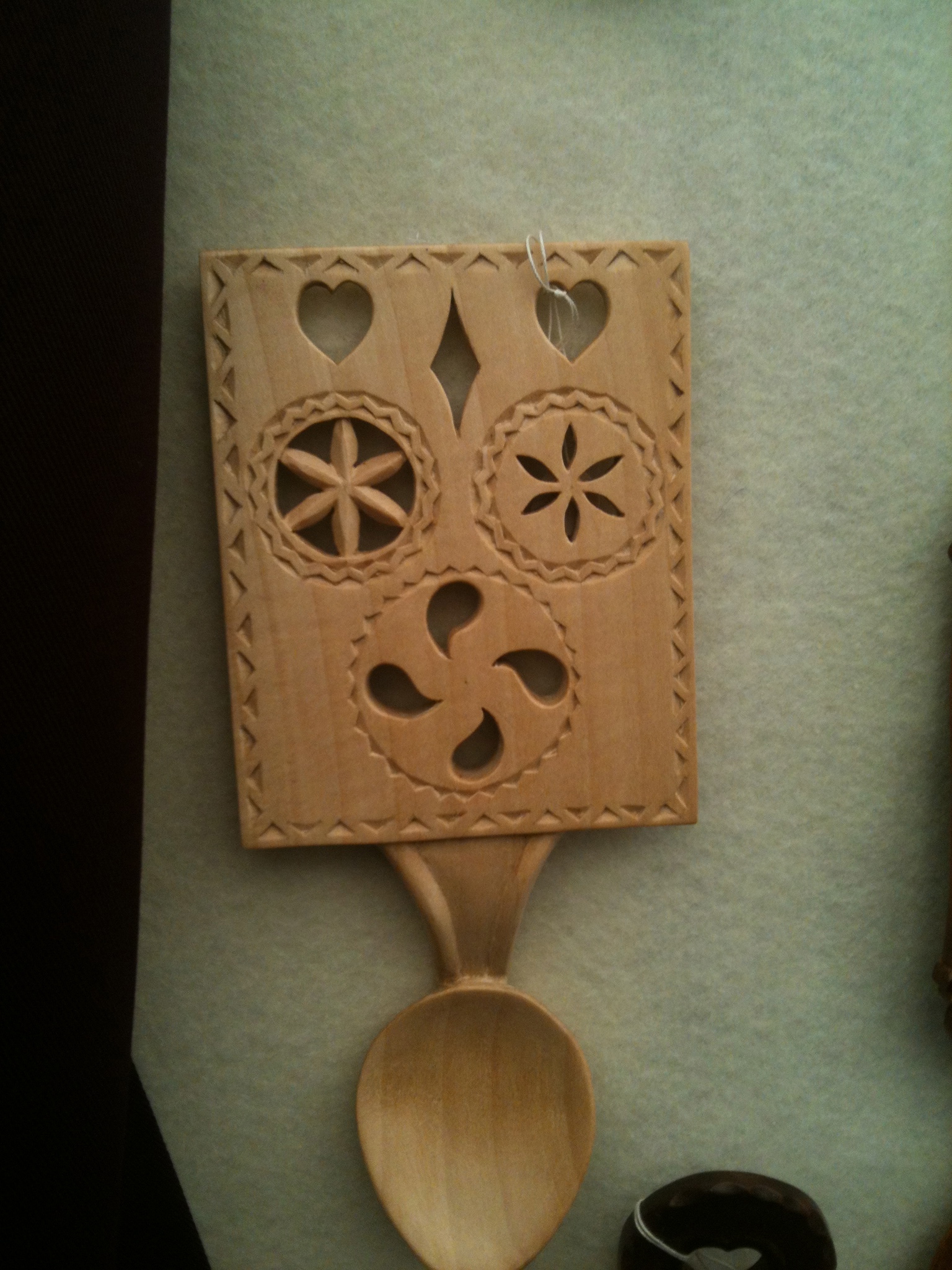 The Flower and the Mill

This last example, is taken at the same Welsh festival as the other two from the Indian door (now on a yurt) and is from a love spoon, made by a Welsh carver to an old love spoon pattern, although he did not know himself why these two appeared on old love spoons. So you can see for yourself, its not like we have been chasing after these two symbols, and although I can not say they have been chasing us either, here they are over and over again, forever chasing each other…

We are about to Earth this Starry Mill, to ground it into reality.

A few years ago I had this vision spring up, of a voyage to a mythical place we called the Heart of the World. No one ever told me that such a place existed, and the only reference in old maps back then showed us Jesus at the centre of the world, like in the Mappa mundi of Hereford.

The idea that sprang into mind out of the ether that day, was to go to the heart of the world, in 4×4 trucks (for style) and build a tent palace there. This was due to the fact, that a moment before I had figured out that such a place exists, by doing a very simple calculation, but let us not stray too much out of our current subject…

After some of those 4×4 voyages following real lines and some unseen, I found out (by accident?) that there has been an actual tradition of such a place, the axis mundi, one of such place was the oracle of delphi, and was marked by a magical stone called the navel of the world, the Omphalos. If you like the notion yourself a good book to read is called ….. The Heart Of The World (funny) by Ian Banks, exploring a two-fold voyage to some mountain ranges which are the body of a Tibetan goddess. There are places called beyols, where physical location and other worlds exist together: to pilgrim is to be an initiate.

Let us collate all into one integrated vision in answer to our deepest mythologies, a response to the Flower of Life and the Heavenly Mill, symbols left for us by our ancestors: to create an earthly reflection, locating the place and positioning the Zodiac Tent (the Mill of many Colours) at the heart of the world.

And in turn to create a centre for transformational events, like the oracles of old: a mystery school that is patterned after  the world’s main cog – The Mill. 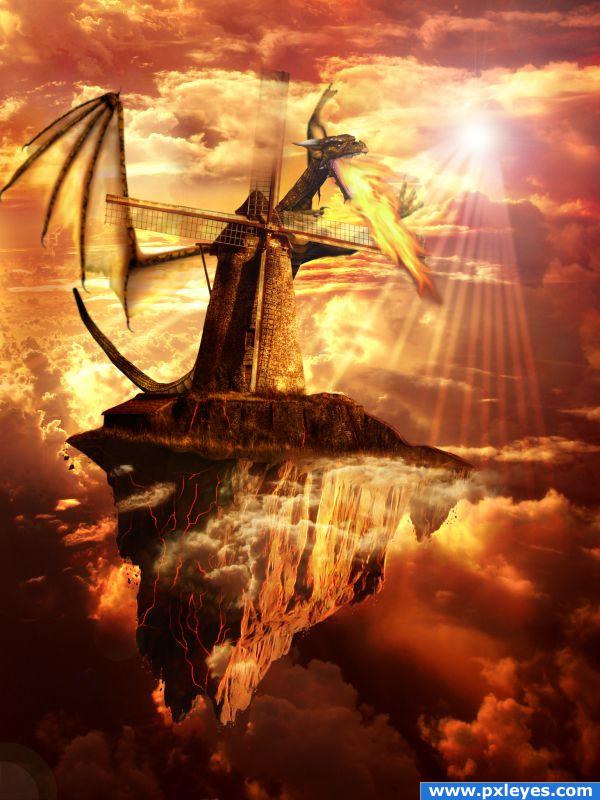