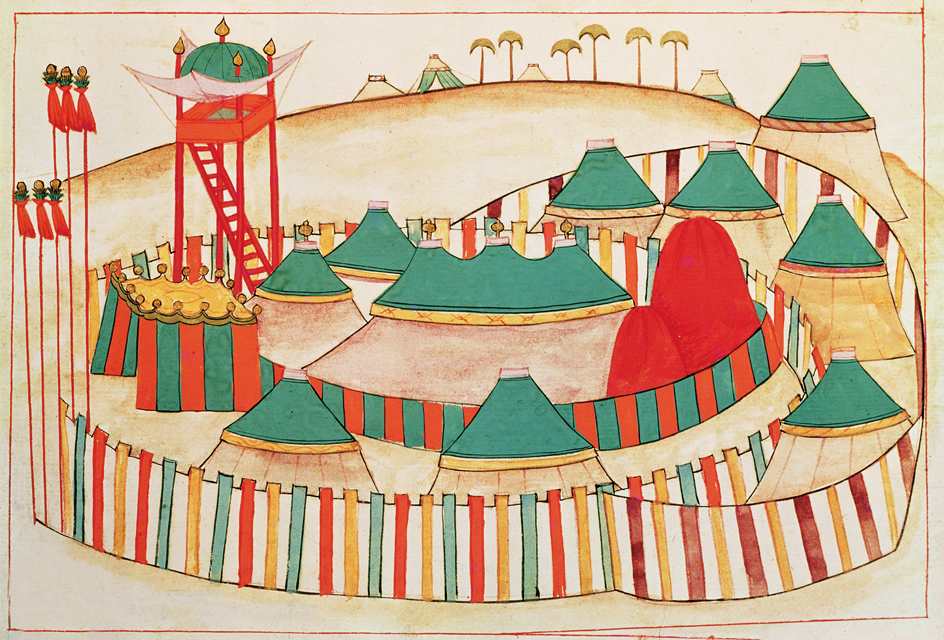 Winter is a good time to incubate the ideas, and as we continue to glue struts for the zome, we have been thinking about the cover…

Now I understand that the Moghul Emperor’s court tents were usually crimson, and the original Zodiac Tent was crimson with coloured bands, so that is one idea, but we are playing with funky colour designs. There are various worldly things to be factored in like what it would look like on such a large structure in a natural setting, the kind of light each colour would give inside the tent and the colours of canvas available etc etc, but here are a few possibilities, hot from Sketchup central…. 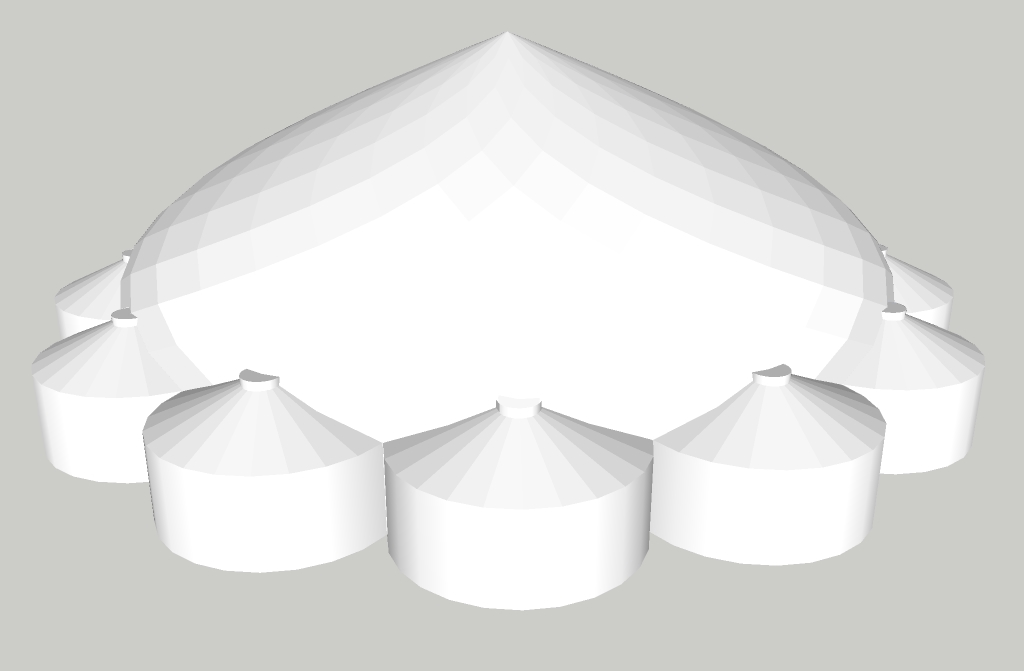 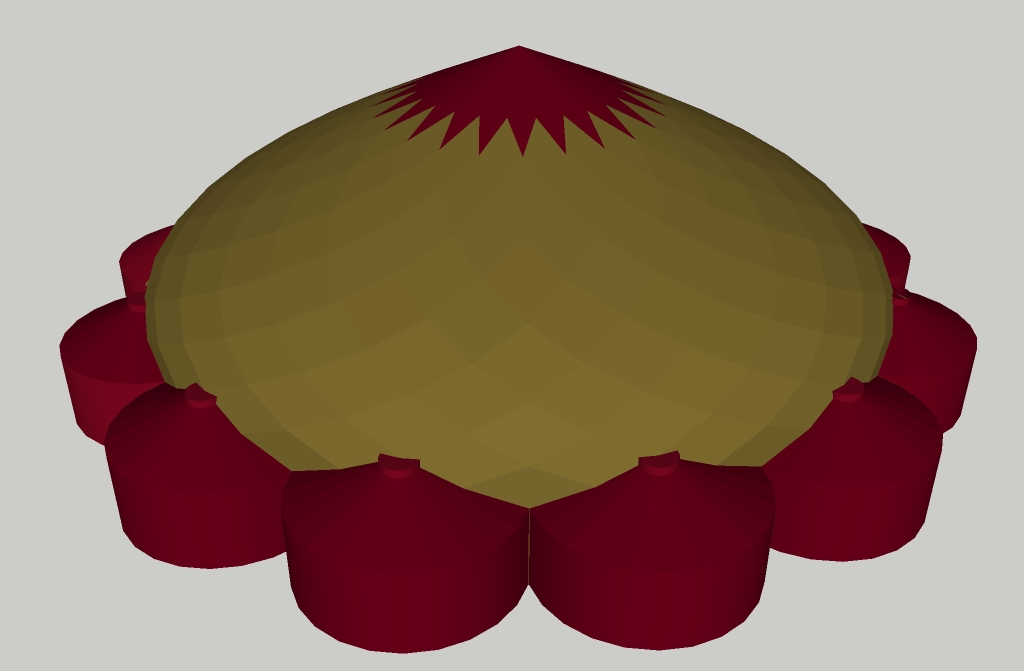 Red and Green (should never be seen?)

Any comments and ideas on colour schemes most welcome…

The last post told of how the Zodiac Tent came to us. Now let us take a journey from its origins in the Moghul princely tent tradition to the Zome at the centre of its modern reproduction. The Zodiac Tent was the most glorious palace tent of Humayun, a Moghul emperor who ruled present day Afghanistan, Pakistan , and parts of northern India from 1530–1540 and again from 1555–1556. Son of Babur, father of Akbar, he was an astronomical dreamer, loving splendour and esoteric mysteries, who lived and ruled his court by the stars.

Humayun’s Tomb in Delhi, which predates the Taj Mahal

“And among his inventions another is a trellis tent, khargahi, which comprises twelve towers, burj, to the number of the signs of the zodiac, buraj. And these towers are contrived with windows so that the light of the stars of fortune can shine through their holes. And the star of the beauty of its arrangement and form shone on the pages of the events of the universe: The light of fortune shining through its windows, Couriers of power hastening from its doors. And another trellis tent like the sphere of spheres, which encloses the sphere of the fixed stars, surrounded this trellis tent on all sides, so as to fall on it like a cover. ” (This passage from “Felt Tents and Pavillions: The Nomadic Tradition and its Interaction  with Princely Tentage”, by Peter Alford Andrews. Our friends, Peter and his wife, Mughul have researched and documented nomadic tents in meticulous detail).

There is some debate as to the details of the form of Humayun’s Zodiac Tent, but the general appearance was 12 trellis tents (yurts) in a circle for the 12 signs of the Zodiac, with a central canopy covering all, to be the celestial sphere.

Our challenge in designing the latest incarnation of the Zodiac Tent, was what kind of structure to have as the centre….a giant yurt?, a circus tent-type (big top) structure with a central pole? a geodesic dome? We wanted a framed tent (one where the frame stands alone without the cover) as opposed to a velum tent (where the stability of the frame is dependent on the tension in the cover, like a big top) as we were clear we wanted to eliminate the central support which stands out like a …… in the centre.

Now the meta-level. Around that time an exaggerated number of abstract threads were coming to our story, catalysed by the Scholar. To explain what I mean by this, let me introduce what we call the “HTML”, or ‘living language’. (The name ‘HTML’ comes from the web programming language , referring to a code working behind the scenes). This talks in the messages which come to us from the universe at large, in the form of symbols, seeming ‘coincidences’, omens, or even directly.

We had been working with this force for some time, but what was emerging here, was a living structure in the myths and symbols that were presenting themselves to all the people we work with, seemingly spontaneously across a couple of continents. What we were seeing was knowledge and myth transcending culture and time, parallel structures appearing across disciplines. This is the lingua sacra, alluded to in “The Glass Bead Game” by Herman Hesse.

One such thread, coming independently over a couple of days involved:

The 4 cardinal stars, in Taurus, Scorpio, Leo & Aquarius marking the solstices and equinoxes (from zodiacal research)

4 horsemen of the apocalypse (from Chloe’s dream)

Ezekiel’s vision of the chariot of “living creatures”

Metatrons cube (in a message from the Peacock)

With the Flower of Life underneath

Then along came the zome. ‘Zome’ is a general term for a shelter, the frame of which comes from a family of complex geometrical structures, found in many natural forms such as pine cones, and honeycombs. (For an in depth description of the background and associated geometry, see Rene’s website at http://simplydifferently.org/Zome).

We then discovered the helix zome, developed by Nicolas Causse, which is basically a curved version of a zome.

The struts of the helix zome, are half helixes.  A helix is a spiral with a constant diameter, like the DNA spiral.

And, if you look at a zome from above, you will see the intersecting struts form the flower of life. “That’s it: our central structure!”, declared the Scholar. The zome became our meta-structure, a shape where many disciplines were weaving in and out of each other. How we were going to make it was the next challenge…

Today’s progress on the zome for the Zodiac Tent, despite the relentless Welsh rain, has been attaching the first and second level struts together with that first connector.

Now is a good time to introduce the story behind the Zodiac Tent, and how its present incarnation came to us…

Like all stories of power, the elements of it are threads in a multi-dimensional tapestry, and any starting point has many associated references. So, for this thread I will introduce us as canvas tent-makers and begin with the tent palaces, which for some time we had been dreaming of: grand nomadic structures, which stand as the heart of a tribal village.

Over the last few years, we have been involved in the making of a few.

Two-storey Yurt in the Ardeche, France

Then, a couple of years ago in Israel, The Last Act on Earth, the transformational travelling show, was born.

Later, back in Hungary, we were looking at Mughul palace tents, in particularly, Humayun’s Zodiac Tent, which was a grand 16th century court tent comprising 12 trellis yurts in a circle for the 12 signs of the Zodiac, encompassed by a central structure for the celestial sphere. We then had an enquiry from a guy who wanted to make special tented accommodation for festivals, and in designing his camp and talking to him about the Zodiac Tent, an artist came up with this picture…..

Very soon afterwards, we were contacted by Iwan Brioc from Theatr Cynefin in Wales, with his proposal for an itinerant transformational theatre, with a travelling venue tent complex which looked like this…

This was an omen to us, as here was someone, seemingly unrelated to us, who seemed to hear a very similar vision about a travelling court tent, like the grand tents of the Moghuls. So then the structure evolved into this…

Zodiac tent with zome as canopy

…a story by itself, so we will touch on it later, but what is noteworthy is that as we moved on with this journey, we find more and more people who come to us and say, “I have heard this story” or “I have also been working on this for a while now”.  There are some meta scripts which are out there at large: we do not own them, we simply are helping them come true.