The last 20 years have brought about a new advance in thinking, in the way we view ourselves, in almost every field of science, new theories that stand against the mainstream approach, individuals that at points risked their whole careers to venture a theory. So little by little our story emerges from the clutches of convenience, I would not go as far and call it the truth, because a lot is missing in it, a whole other perspective, a prior way of seeing things we as humans lost, yet it is a step.

Books the like of, Against the Grain, Deciphering Ancient Minds, After Eden, have come out, at times it seems to me that we are at the end of an epoch, The Holocene, and we are writing our conclusions. There is on part of this story that has never been written, although it lurks in the pages of all those books, it is our non domesticated self, who we were.

The story of our consciousness and our civilisation, the way we conquered and dominated every inch of this planet has been written piece by piece, but the real hero of the story remains hidden between the lines of those books, that hero is the Nomad. Seeing that our way of life is being questioned now we are facing a worldwide pandemic, where we are caged in our stone tombs, we retreated into the distrust we have in our own minds, of the stranger the other, to a point we can no longer meet them, we can no longer touch, I think in this time of reflection would be a good moment to remember our real selves.

Before we go there, I would like to point out that some of the latest editions in the study of viruses has brought us some strange ideas, one of those is that our own memory is constructed from a repurposing of viral characteristics, meaning we create virus like capsid like units which we infect our own brain cells, or in other words we wrap information (mRNA) with which we infect our own minds, Freud spoke of the layering of memory as a structure of our identity, and so in a way we can also view the self as a sort of virus, and the story line which it tells us is one we construct continuously to hold an idea. There is of course a question if this idea is actually true, have we erased the memory of who we really are?

So the idea that some individuals are now working hard to rewrite our story, hatched from DNA research, from archeology, and anthropology is interesting, and I would add that the fact we are currently facing a world wide viral attack, on which we all have to question ourselves is an osmosis, it means to me that our collective memory is being rewritten.

There is this series currently on netflix which takes us back to Freud, in which the young Zigmund Frued, works out his hypnosis therapy, he is being ridiculed by everyone, yet he find this mysterious Hungarian girl, with whom he works, she is a táltos, an Hungarian shaman figure, even though that in reality, a táltos is normally a man, usually born with some defects or unusual features, like excess body hair, different strands of colour in the hair, extra bones, teeth etc. A person who is called at some point to a shamanic path, his power is very related to horses, but the same story applies to the táltos horse, he too is a mutant, with three legs, or strange features, he too must go a transformation in order to arrive it his secret power and potential, usually by eating ash from a fire. 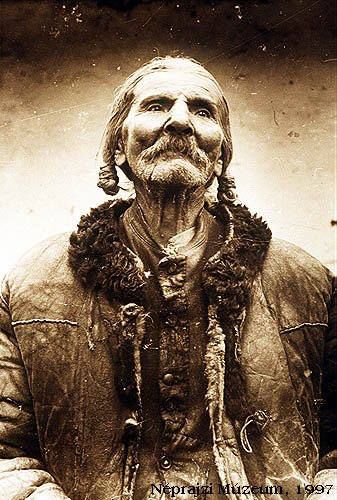 Like we said our minds are structured so that prior strata is erased from memory, and so even though that here in Europe in the not so long ago man of a secret power lived, we no longer understand their function, the táltos is interesting to us because of something else though, because unlike other type of shamans, his power relates to horses. So in this mystical figure we find three elements that were lost to our memory, the Nomad shaman, the mutant, and the horse.

It is hard for us to understand the meaning of that person, yet I would say he is an important link, it has been argued that the development of our consciousness has allowed us to hunt bigger prey, collaboration and shared mythologies have allowed us to work together like no other species, yet those myths and stories are somewhat lost to us because they lay in an earlier strata, before the Holocene, when we were magical nomads, before we domesticated the largest of animals, in After Eden, Kirkpatrick Sale, puts forth the theory that art, and painting came about when the power of collaboration and society came to such extent, that we stood to exterminate all the larger animals we lived with.

Cave art would portray Bison and Aurochs and horses, and I would venture to add something to that detail, I would say that we had an understanding in the epoch preceding our own, we understood that those races are the keepers of the ecology, we knew that killing them would bring life to some extermination, those were the animal races born to unite all the micro climates, they grazed the grasses in between the forests, they kept our world from desertification, so before we forgot what we knew, and because we lived with those animals so closely, we drew them on our walls, as magical ritualistic keepers of our world, we learnt their magic, which the táltos still performed only a few hundred years ago, he would stomp the earth, to indicate hidden treasure, he would go into altered states and call the rain, just the like first people tell us they always did, and we find a lot of that story in the San bushmen.

So the nomad mutant was the keeper of the magical properties of those races, it symbolises a sort of balance between man and the envioerment, nomads were the keepers of ecology, they lived with the races that ate grass, keeping the big steppe and swathes of land that allowed our forests and smaller ecology zones to prosper. My addition to those ground breaking theories trying to rewrite our history, is that we knew the importance of those animal races, it is obvious to a point we learnt their magical practices, we knew how to stomp like a horse in a certain situation, in order to find treasure, so we too must have known everything else, we knew that our grass lands, where nature could not evolve further, and grass being the first cycle, were kept and fertilised by horses and bison, and the magic of living with those animals, and possibly the idea of lising them as was suggested, was a big chapter in our evolution.

I would say that now that we face constant new strains of viruses, because our forests no longer stand, and ecology has been taken out of balance, the loss of the mutant, the shaman and the horse with the bison brings it all up, nomads even in our own epoch were the keepers of the grasslands, when those were lost, when their mythical keepers were brought to the edge of extinction they came into the last surviving ecology system, the pockets of forest, so in a way climate change, is a process of losing man’s relationship with the animals, and I would say that our attempt to domesticate some of those races, could have come about as a way to save that balance, rather then trying to create a new food source.

Now we are in the concluding chapters of our Epoch, and we wonder if we will be allowed to go on, and the answer to me lies first in the shaman and the horse, the nomad and the mutant, they are the fringes of our society, yet they groom it, like horses groom the steppe, it is no wonder that shamans took the form of bulls or horses, the ancients knew something the virus in us has forgotten, the lost chapter, yet we lost it so little ago, so táltos is the answer, the nomad-mutant-shaman and the way for us to save our place in this world is to bring the nomad back, and allow him to cultivate the empty spaces, to fight desertification, which would allow our forests to flourish again, and possibly we would not have to die or forget even more because of viral episodes, its an earlier strata in our memory we have vacated in order to hold on to the little ecology we have left.