Like we promised a few days ago, we are going to to go back into the Middle East problem and view it from a deeper perspective through the eyes of the living myth. this time we are going to leave Israel and travel back with Abraham, it was Abraham who is to blame (if we can blame anyone) for the Israeli problem in the Holy land (called so because it was promised to him by god), it was him who was commanded to leave his land and travel to “a place that I will show you” (gods words not mine).

We have looked into the region’s problems from the group mind point of view, from the emergence of belief systems and religion. it was the middle east that gave rise to tribalism, and possibly nationalism later on, like a melting pot for the Human psyche. we outlined a framework, how we as people became tribal, and how we lost tribalism and turned into nations, and how we lost nationality to globalism through religion.

I would like to travel back in time, to the first god, to the living Myth itself, to the point of conjunction.

So we are now rewinding back in time: Abraham stopped with his father en route to the Holy Land in Haran which is in southern turkey of our day, instead of following him back down to southern Mesopotamia. we are going to stay there with him.

To help us look at the Human psyche of that period we need a new contender, another religion and another god, (actually son of god). we are going to travel through myth and time, to an older religion, the one of the Yazidis, the people who have just been sieged on mount sinjar, by ISIS and are threatened to be wiped off altogether. it seems almost as if we MUST have a look at their beliefs before their neighbours manage to wipe them from the face of the mythological map.

The Yazidis are so interesting to me because they have elements in their faith that go back even earlier than judaism, and of course christianity and Islam. they are peaceful people living in northern Iraq and in pockets of turkey and Iran. this is funny because they are now re-locating en mass, so high time we all take a look at this Ancient Link to the Living Myth. hopefully using their faith, we can glimpse an earlier myth, the original myth.

The Yazidis have been hunted down, especially by neighbouring muslims because of something peculiar: they are believed to be Devil worshippers. now this is not entirely a misconception because they actually do worship Shaitan (satan) the fallen angel the king of all other angels, except they no longer call him that, or in fact they don’t even use any word that has “sh” in it at all, maybe that jus because of the amount of hassle they got for it.

Instead they call him Melek Taus – The peacock angel, he is believed to be the original teacher by others, maybe even the original  Christ as is described by Mark Amaru Pinkham in the truth behind the christ myth, by others as a teacher who taught Adam and Eve how to worship the Sun (remember that sun worship bit as we will come back to it!). he could be traced back through Human psyche as a myth, through Christ, to Mithra, to Murugan and Finally to the Peacock Angel of the yazidis, an indo-aryan god that has been part of so many religions in one way or another, either as himself or as an incarnation (like christ). 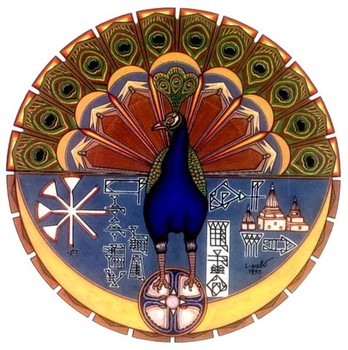 We have been quite involved with our own Peacock Myth for some years now, since a visit to a cathedral in southern France some years ago, in a town called le-puy en valley. above the black madonna in the cathedral, there is an amazing mandala with peacock motifs, in fact the whole room is painted with peacock feathers.

We have found that mandala exciting because we believe it represents the group body, with a peacock feather for each member of the group and their position, its like a map of sorts of the 17 positions in the group body.  I guess since then we have been tuned to some peacockness, and the Peacock Myth, so now we are going to Follow it to its root and find where it came from. 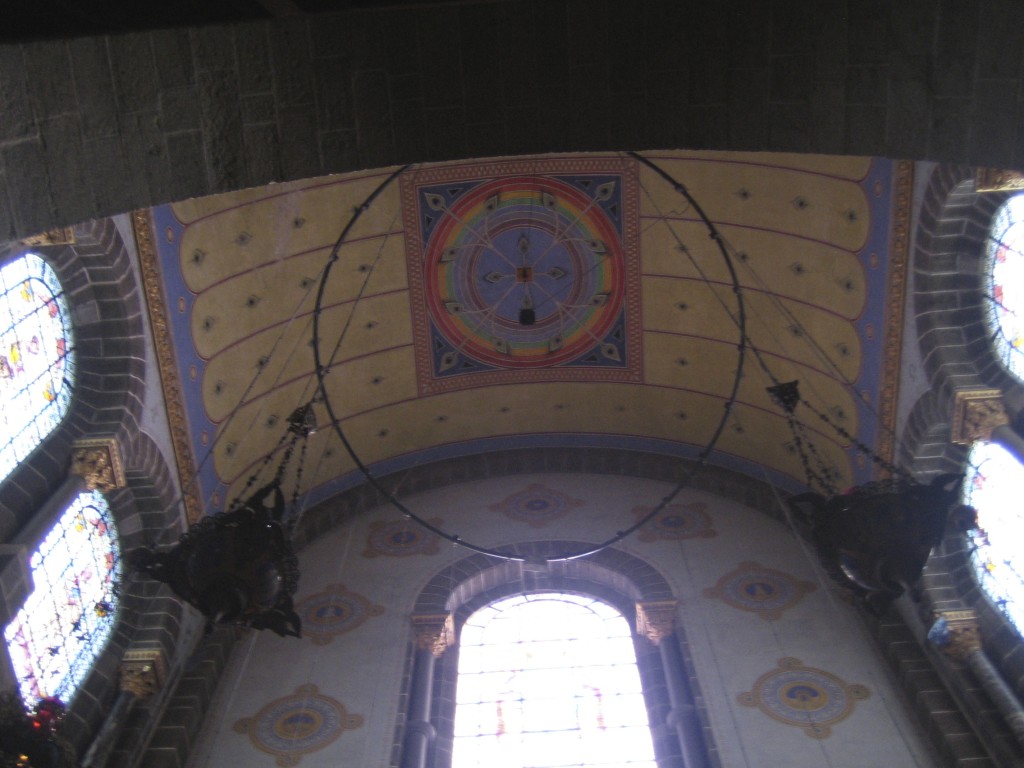 The Intersection between the Habitat of the Yazidis, their Melek Taus, and Abraham’s Haran, is interesting. I think there may be more to it than that, very close to Haran is an archeological site called Gobekli Tepe (the hill of the navel), this is going to be the true gem of our Entry, it is believed to be 12,000 years old, and the oldest temple complex ever found, the size of its megaliths is breaking all previous notions of the capabilities of stone age people, I recommend you watch this movie of Dr. Rose’ Visit to it, without it this post is not going to be exactly the same.

The Notions that are ground breaking , it is the turning point in Human civilisation, The builders of that temple complex seem to have been hunter gatherers, and not Sedentary, Dr Klaus who is excavating the site, has put an interesting Idea forth, that actually the people did not develop agriculture slowly and then their Religion grow with it, it may have been the other way around, they built a massive temple and needed to start farming and become sedentary to be able to stay and worship in it, that may change some of our ideas about The birth of agriculture, and History itself (it was born in Mesopotamia after all).

The site has been buried later on though and not by nature but by the hand of man.

Let us go back to the Yazidis, in their belief Adam and Eve have been chased out of the garden of eden because they ate wheat (not apple) which is striking because Wild wheat comes from 20 km away from the site in Southern Turkey, it sounds to me very similar to the story of early farming, cultivating wheat, the garden of eden, could it be it, the place where Nomads stopped for the first time, and started farming, and what did happen to them and why did they bury the site?, is there a link? do the yazidis know something which is why they would not eat wheat?.

Another ground breaking theory (follow link for the movie) that has come up about the site is by Wayne herschel, a man that has dedicated years to chart Ancient sites all over the world, to find out they all are actually detailed star charts, and more amazing still he claims they all point at a mysterious sun , not the sun of our universe but one that belongs to another,  the place the gods came from, he says our ancestors did worship the sun, but it was not our sun they worshipped.

This has some echoes in science, and it is believed by some that the reason for the precession of the equinoxes could be that another solar system is acting on ours, and its gravity is causing the tilt responsible, maybe this is a bit technical for some, the idea is that our sun has a twin, that pulls on it, we will come back to this at the end.

His theory was that the site was made in the shape of the constellation taurus, a geoglyph a map pointing at a secret star location the ancients knew about.

What we have here is the intersection of the nomad and the sedentary for the first time, the nomad becomes sedentary only to worship in his magical temple complex, it was not a group of hunter gatherers that planted wheat by mistake, it was a magical community of nomads that build a temple to communicate with another world, another sun, and went on to cultivate nature, in a new way maybe for the first time.

The power of man over nature began a new era, or a new worship convinced man that he is larger than nature, he left Nature as his religion and started worshipping a larger than life god, his gods stand up from the environment and he is king of all around, you get the drift.

We are now going to traverse the ages following the Peacock angel through to his last known manifestation at the other side of the Middle Eastern drama, the last time before he seems to have disappeared, just to show case the that the theme has been preserved in this character somehow. 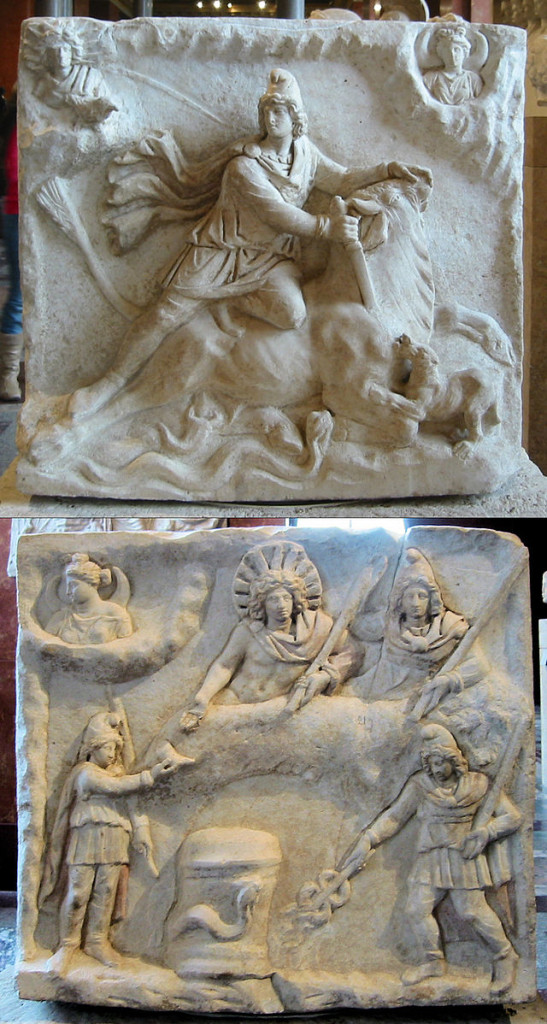 The Secret of another sun

He was Murugan in india, he was mitra in Persia he was the maker of the christ myth, brought forth by st. paul …… and finally he is Mithras the slayer of the bull in Rome, maybe his last worshipped form, the teacher that has come to free the people.

the scene of Tauroctony is very similar and seems to be depicting the same constellation again – Taurus the point where the knife enters the Bull is where the pleiades are in the Taurus constlation, and here we have Mithras as the hyper cosmic sun.

David Ulansey argues that this is why this later god of the romans was born, because of the need for an explanation for the newly (was it really) discovered precession of the equinoxes by Hipparchus, I think the imagery has been there all along. 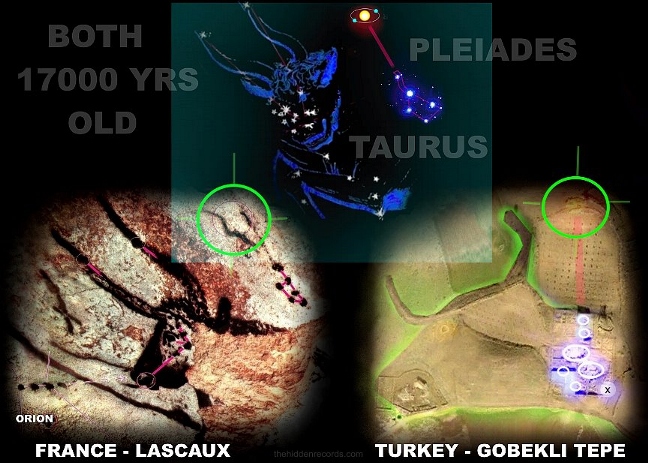 Here we have the same secret sun star, that the ancients seem to know about again depicted in a similar manner to Wayne Heschel’s geoglyph maps.

Is Mithras seen as the invincible sun a twin sun that pulls on our world? whilst depicted with the solar sun.

The lost religion of rome and Italy, of a god that is from another universe, seems to me very related to that Initial Peacock Angel that taught Adam and Eve to worship the sun (the other sun of course!) in the Garden of Eden when they were still Nomads turning Farmers.

The secret story of our origins, and the nomad versus the sedentary (like we said before) may be a lost link to another age: before religion, before man took nature on, and made it his own, before we claimed the land, and the animals, before we rose as greater than nature. Maybe it was so because of some Visitors from another world, that came by and taught us marvels.

I have other views, but I love the myth of the other sun, and that it was worshipped in Italy, that some believed that there was an opening in our world to another world, and that their god was not a god of this earth, not even from this universe: he was the Sun of another world, our parallel universe, our twin sun.

Maybe one day we will find the opening in our world to that other one. who knows maybe it is still waiting hidden somewhere in Italy, where time has forgotten about it.