We are great believers in omens, and believe those can come in any form.

King Solomon was reputed to be able to speak the language of animals and everything that lives. I find the flight of birds, or the appearance of certain animals on my path to speak to me directly, one can learn to read the interplay of energy as a map.

It’s the way the world speaks directly: it could be what a certain tee-shirt says just after I think of certain thing, or a flyer, even traffic signs speak! anything talks: one just need to be tuned into the inner process and the world does not just seem to be talking back, it does.

The other day we started our southerly immigration.  we always have been nomadic and don’t usually stay longer in a place than a year.
So two years in the same spot here in Wales was a first for us, I felt those itchy feet a time or two, but it was a good training towards getting our own place one day.

This time we are on the move to the south, to a warmer climate, to set up the zodiac tent as a centre for conscious group work. its the culmination of 18 years of group process work, we have spoke about it before here and here.

The first leg of the journey started by taking our biggest truck, full to the brim with zodiac struts and connectors with canvas and the rest of the heavy things we own. 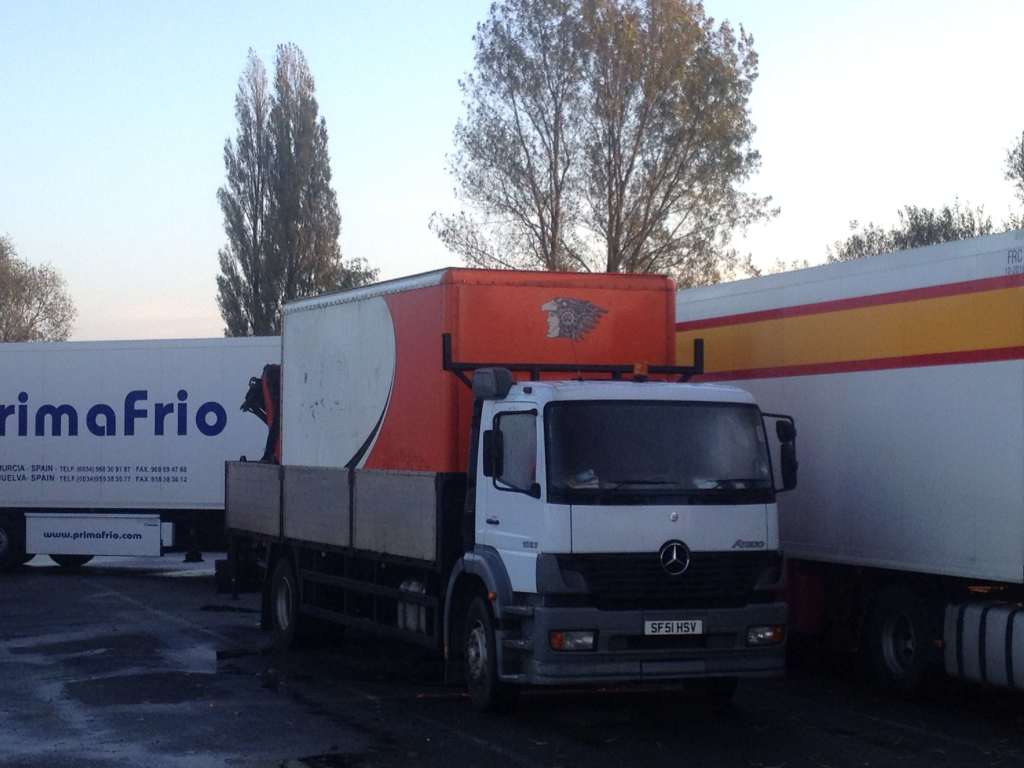 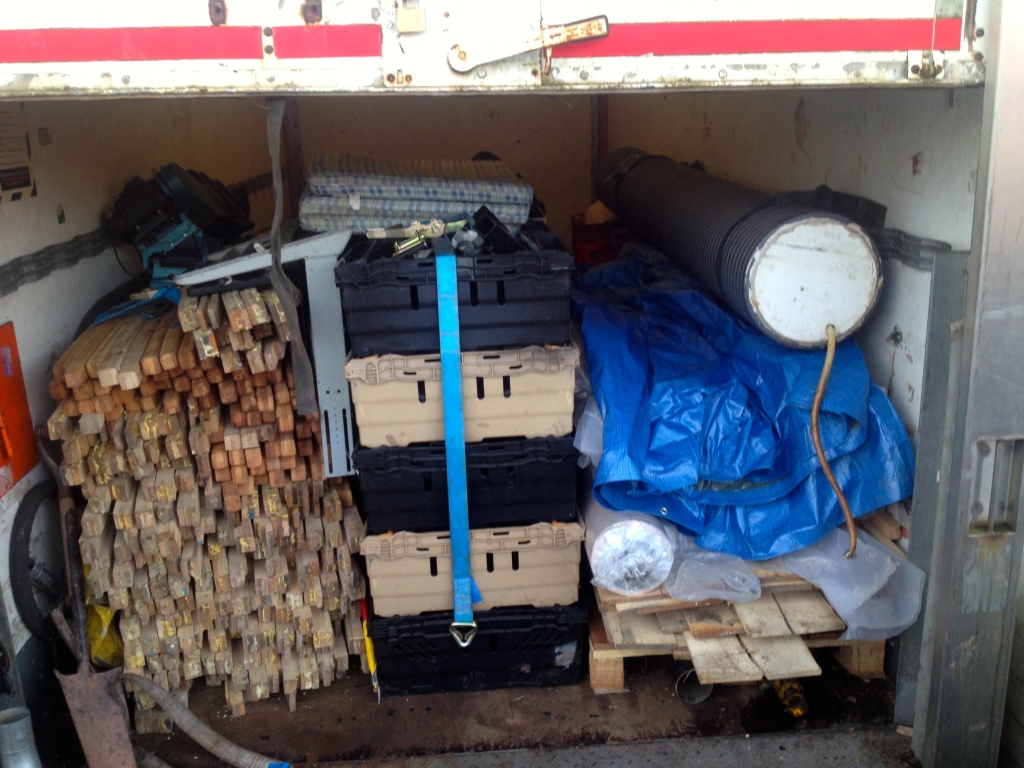 The carriage of baggage

We drove it to Italy, where we intend to buy land and create a unique centre for group work, the sort of campsite we always tried to create with our customers. One that has real nomadism at it’s centre and real interactions. not just “glamping”, but where there is a real experience which is not about just getting away.

at times Nomadism gets over glorified I guess, so it is hard to find out that really living on the road has a high level of fear attached. One is always dealing with the facf that main society is settled and has everything laid out for it, it is getting harder and harder in certain places to simply be, even to fill your water butts, but for those that still do travel that way I feel it is worth it, in fact living with the fear, is worth it.

Dealing with the fact one has not got everything laid out is great. I love the moment of having to deal with things in a way that has never been done before without the routines: waking up at 6 o’clock to drive through the alps to discover your water from yesterday is bad, and filling it up again in some mountain stream, using the hot kettle to do your laundry in a pot, the fact is, we really need very little to get by with, and that something in us loves that simplicity, we are all nomads in our roots, at least I am.

Because the first place I went to when I started travelling 18 years ago was Bologna I decided we will use that as way point, and store the truck there while we drive the rest of the vehicles down (we have quite a few live-in vehicles).

Crossing over back to the continent was nice, those never ending horizons again, and the alpine villages of France made me remember living in the road here before a few years ago.

Alps on the way to mount Blanc

We aimed to cross into italy through Switzerland because the mountain pass of st. Bernard’ held a certain meaning, like napoleon’s army, but with difference.

I believe that the first sequence that one goes through in any given sequence in life acts as a map, a blue print for what will happen in it.
So entering italy was the same, I looked for the opening sequence, part of what I do and art the of how I “converse” with the forces at large, maybe some would find it strange, I find it strange others don’t.

Because the pass is in the south of Switzerland, we would have had to drive the truck through the country.
At the French border we were assured (by the French) that there is no problem, so we drove on. the truck in front seem to move and the gate was wide open. we thought …… sure here we go too.

We drove through, but just as we got to the barrier (at speed) the barrier went down, but because we were driving quite quickly it opened up again. I guess the security camera told the operator to lift it quickly or it be broken, the swiss guard woman did not like that, no no no.

Long story short was that we needed to pay tax for the contents to pass through Switzerland, and there being no customs officers at weekends would have meant we had to wait ’til monday.
There seemed to be no one at all at the smaller second border crossing we attempted, so we drove through, feeling victorious but after a mile or so got stopped and turned around. Apparently the swiss don’t guard the border crossing they guard a mile into the country. The reason for this is that they can then fine you for driving without customs clearance!

Sometimes guidance comes from the police!
The border man said “cross at mt blanc”.
The problem was that my co-driver felt like we have to pass through the St. Bernard pass, to open up the door in a certain way.
And we could not wait until Monday, it was night and we were tired and no answer seems to be at hand until….. I realised she could cross over into Switzerland and pass through the at Bernard pass, and I can drive through mt blanc.

passed the pass with lines of power

This way both doors are open.
Both roads go down into Aosta in italy, they are two ways through the same mountain chain through the mt. blanc (French) and at St. Bernard pass (switzerland).
We ended up crossing same time, and met in Aosta, problem solved and guidance looked after, the double door to the south.

It was an amazing crossing, once we figured it out everything seems to be In place.

The flight of birds seem to echo that too. as I was on the phone telling someone I’m crossing at mt Blanc and just as I uttered the words, a massive buzzard jumped out of the rock near the road and almost left its talons on the windscreen.

The other side of the mountain there was another world…… a warmer world.  I could see why for some of us in the group crossing into it would be hard, having lived in the UK for a while. once you enter the Italian psyche it’s different, some northern european find it intimidating, because its alive.

Italy is very open and calls one to surrender into being at ease with the people around, something which is hard for Northern Europeans, coming out of UK it can even induce a culture shock.

However for me it felt like coming home, back to the warmth of the Mediterranean and the good food, open people and more than all the sun, which seemed to forget it was Mid October.

We drove to Bologna, which is one of my favourite cities in the world, full of young life because of the amount of students that frequent its universities, and it was nice to sit back in Piazza verde 18 years after being there first, when I first started travelling, and it seemed a new world has re-opened. it was nice to know I’m taking our work south beyond that point of origin to the warmth, because we have endured quite a lot of coldness in the last years.

Bologna seems to echo this In the omens it fed back to me. 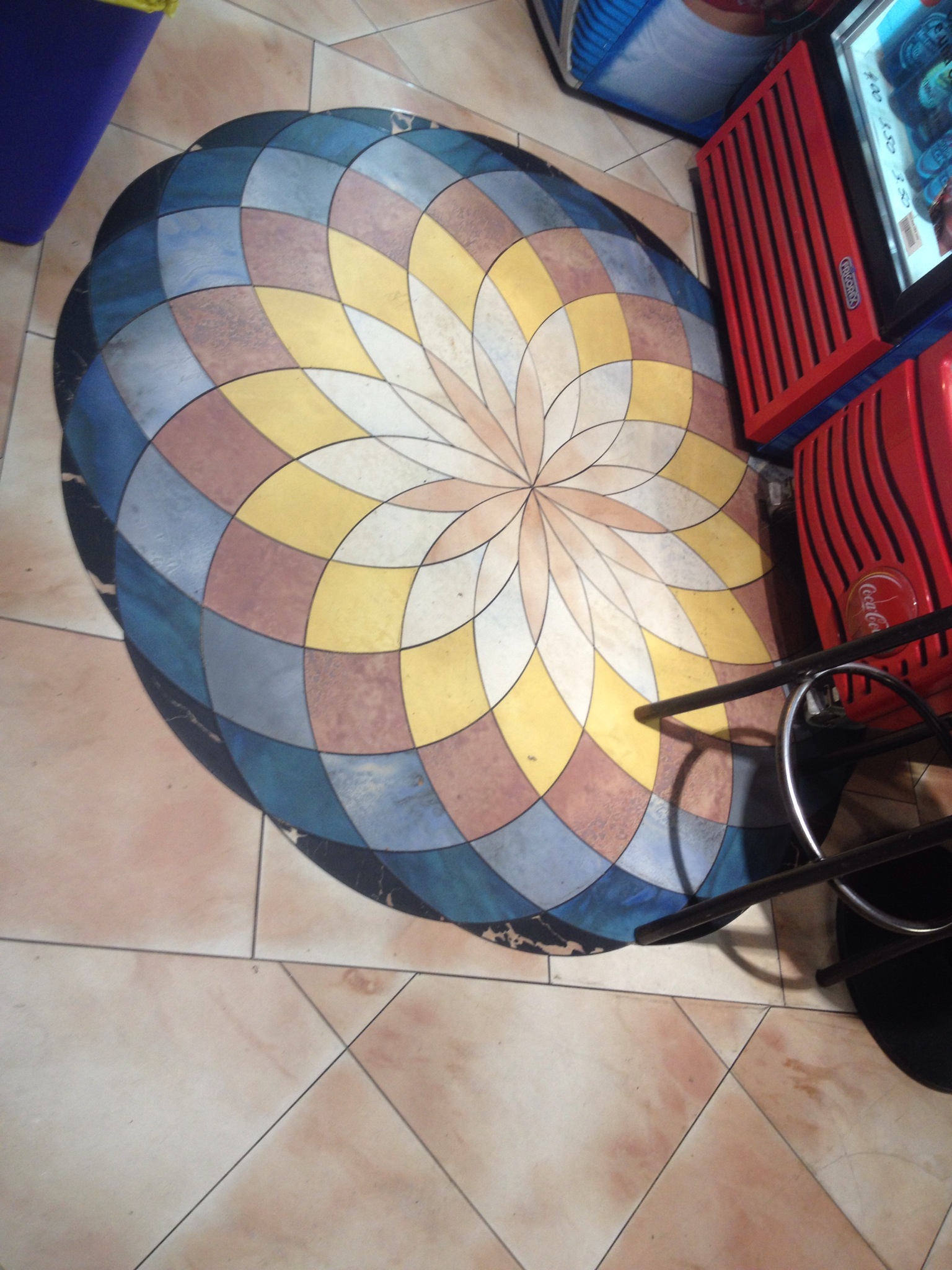 The best of which was  in the  form of what we call “the map” we have discussed it earlier In connection to the black madonna of le-puy en valley.
This time it was a flyer, that read:m
(In Italian) a new world is possible, the wind blows where it wants.
The “map” seem to have a bird flying south emanating from it, and like I said we are great believers In omens, and that one of the “map” is even more special, it is a symbol for the group body, showing all the positions in it, or the ultimate number of individuals that comprises it. 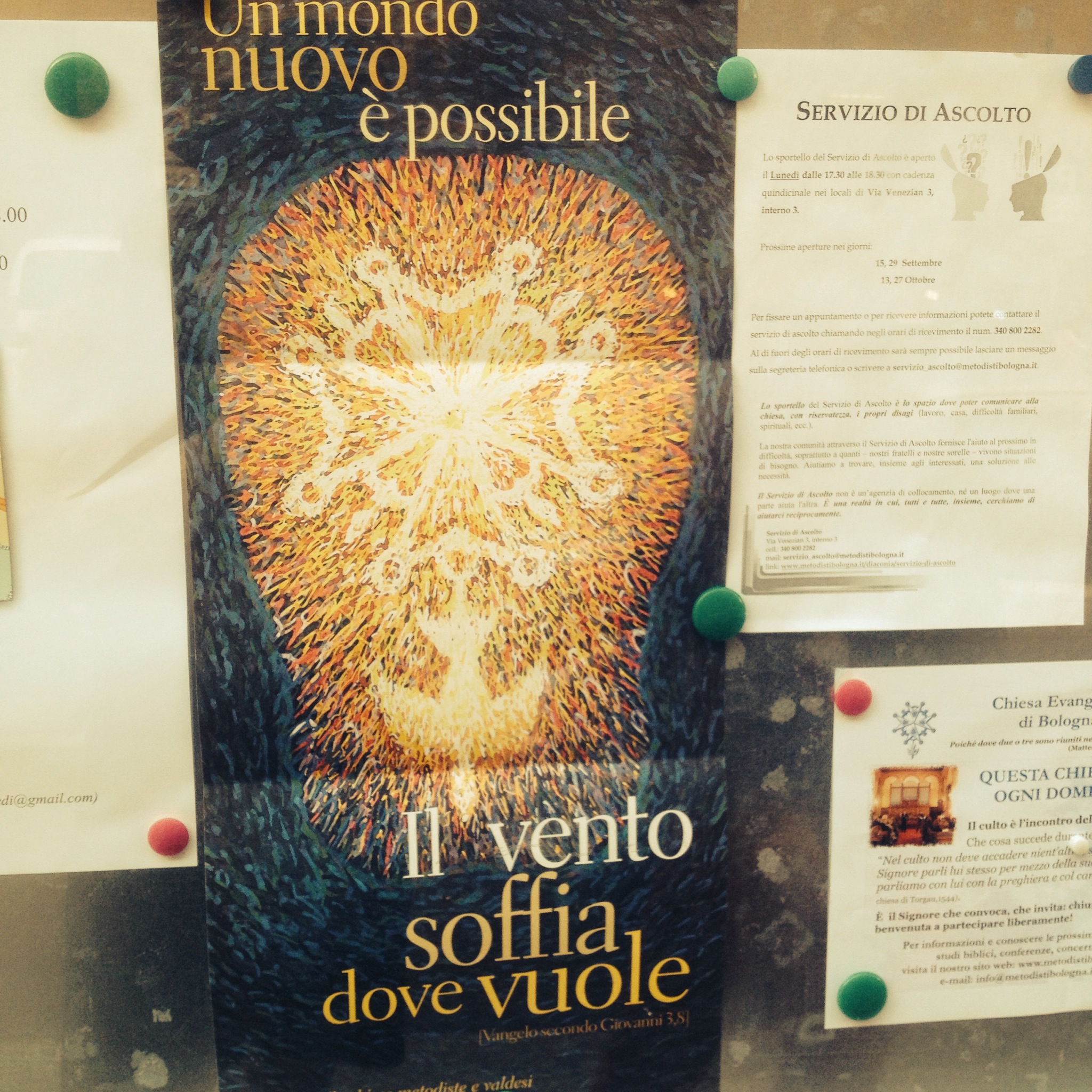