It is often as tent-makers we come to a point that we have to consider that living in tents as a moving people must have had more to it in its core, more than just being in nature under canvas.

On a recent visit to one of the higher end glamping sites, Yurtshire, that point became very loud. It felt like it was time to try and bring forth a deeper meaning to our work, and reveal some of the under cover (pun intended) side of being tent-makers.

We have had the privilege of leading a very nomadic lifestyle, but more than just being nomads we have had the opportunity to take part in something that I think has become almost extinct to the Western person.

That concept is Asabiyya, best known in Ibn khaldun’s (the Tunisian scholar) writings, in one of his greatest works, the Muqaddimah, he observed a cycle in which the desert nomads will conquer a city, to become more refined and sedentary only in turn to be conquered by a younger group of desert nomads, that in turn come and prey on the decay that sets amongst the older group.

This power that enables the nomads to always prevail over the sedentary was called by him , Asabiyyah, and the loss of which in the city dwellers (that were once nomads) is exactly what enables the new nomads to conquer and win.

Translated as the social core, tribalism, group cohesion etc, although no one name has given it the true meaning it has.

He (Ibn khaldun)  lived extensively among the Berbers, and so was familiar with nomads and, towards the end of his life he, then living in Egypt, was part of a mission against the Mongols in Syria.

At the end he saw him self lowered into the city walls to negotiate with Timur himself. Meeting with the leader of nomadic expansion must have been quite a thing for him like his theories have formed skins out of words. It was as if his theory as come to bear upon him, bringing him face to face with Asabiyyah itself in the form of the leader of the nomads.

He observed the cycle of decay that the ruling nomads go through once they too become sedentary and, although was probably the one that gave birth to social sciences in a way, that central force is the one that intrigues us here, not the making of empires, and their decline.

Living on the road in group formation

To us this power is super-alive, as we have the fortune to be part of a tribal type group, a nomadic one I guess you may say: we lived in trucks on the road, as a group. But more than that, we are involved in a group consciousness situation, so that feeling of the group body – that Asabiyyah, the power of the whole, is something we deal with everyday.

I know that the members of the group who went and tried to live a normal life afterwards always felt like part of their heart is missing. I feel the best way to describe the experience of doing group consciousness is being part of a group mind, like living in a shared field of awareness. This does not really tell the average person much, nor does Asabiyyah as a term, as one needs  to experience it to understand what it is. 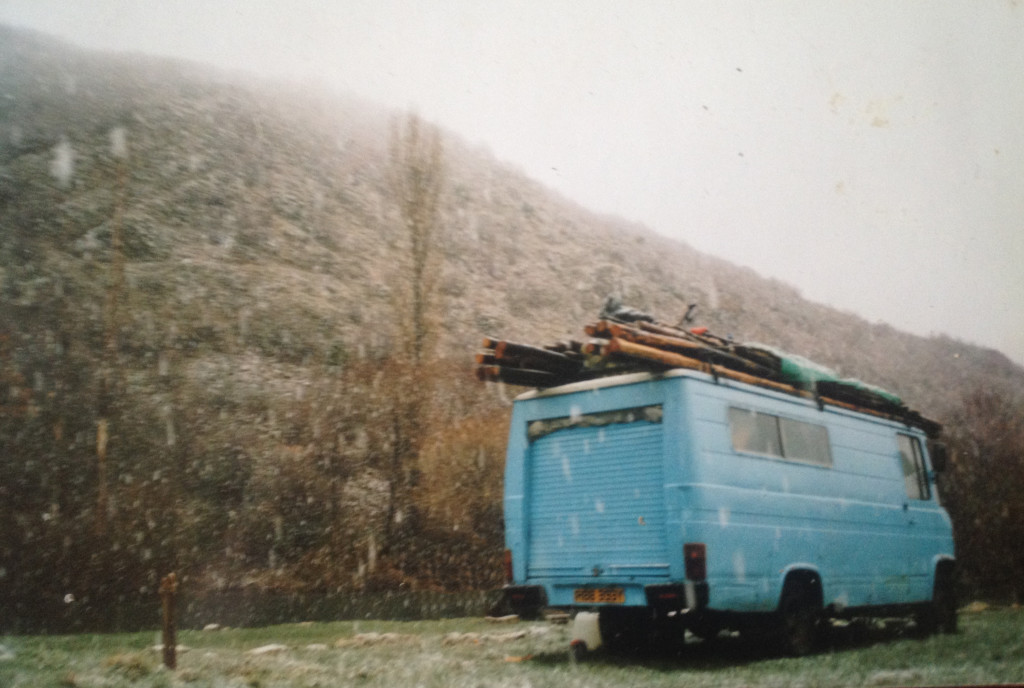 Lone parkup on the Cetina river in Croatia

I know many people that traveled in a similar way and, although they too share some magical feeling that comes from being on the road: a certain knowledge that you don’t belong to the surroundings but to the movement through it, it is not the same thing. Those people are distant cousins to us, we love them, but our true love is in the group process. Although I must admit, to us it will always will be intertwined with travel, because this is the way we met it.

Coming back to the point, we are constantly aware of the need to bring that experience closer to others, and to keep it as the guiding force in our lives. We have also been trying, to no avail, to bring some more meaning to the glamping movement, not so much because we feel it has room for group process, but because we feel it emulates a tribal living situation, and that it should be marketed as such. A central meeting place is a good idea where the holiday makers can come together and experience collectivity.

It is strange because a lot of our work is with campsites, and we see time after time how this industry in cashes on the need in everybody’s life to experience the tribe, to be part of a nomadic encampment, which is magical, but to us lacking a core of meaning.

I no longer criticise that as I think it is great that we can contribute to people having a feel of that tribal experience, and many of the campsite owners are good friends now.

Recently a friend, who lived in tipis for years, told me she feels weird making tipis for people that just put them in the garden. I said, “Instead of seeing it as boring for you, see it as if you are bringing magic into their lives”.

I believe that there is a very strong force which engenders this power of the group collective and that nomadism does  enhance it. This is not a new concept, for example in the book, Songlines, by Bruce Chatwin explores this notion over and over, that moving is what gives us health.

We have decided that was time for us to pick up that flag to bring to people the feeling of being part of greater group with purpose. The idea is to create a place, a centre for this type of work, a place that has tents in it and where people can live in a nomadic/tribal setting, and to focus on it almost entirely.

I believe that in anyone there is a core, a role to play within that group body – within that Asabiyyah. I have recently been watching the TV series, Alphas, which focuses people with various special powers and found it amazingly similar to life at home. One of the women I live with is extremely sensitive as she can pick things from the ether, before they are even thoughts, feelings of people from the other side of the world, usually people who are related to our world of course, just like Rachel from the TV show.

Another women I live with has the power to “push” people, she can bend things to her will. Sometimes she is aware of this power and can positively influence situations, at times she is like the woman from Alphas (Nina) who can’t stop herself from “pushing” people for her personal gains.

I feel like it is time to bring a further meaning to our tent work too. It was very strong for me the other day in the Yurtshire Umberslade site, having 3 yurts in a field is not enough I think. People need, even want to come together and be a part of that greater force.

Its not just a need to belong. We are all part of a greater network, called into the group body, to be our own type of alphas. Saying that I did meet a few people that upon hearing the possibility of self enhancement and connectivity went …. “actually I don’t want anything, I’m happy in my tramlines”. Maybe the TV series was correct: Alphas are unusual people. I am looking to create a centre for them, a place for people to connect to Asabiyyah, to come home into that tribal core. 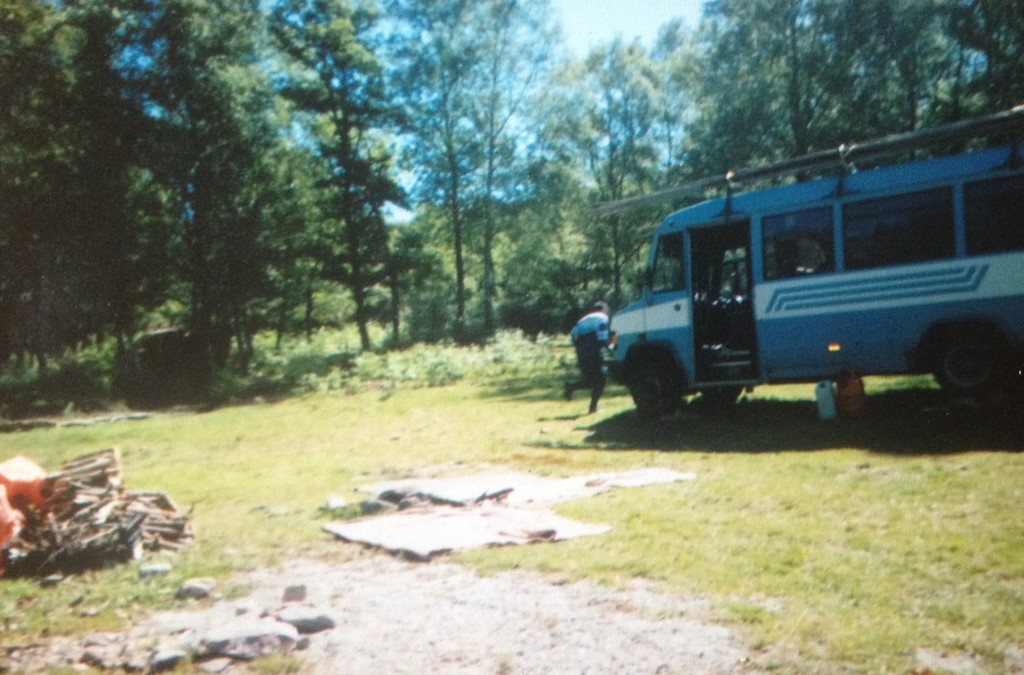 A perfect (mark 10) park up in Portuguese mountains

I guess the hard part is, that I personally feel that feeling strongest when on the road, in some minus 17 park up at 4 o’clock in the morning. (We rate park-ups from zero to ten, ten being perfect with wood, water, and endless nature, and of course no one for miles so we can do our group work without outside disturbances. After years of searching for these rare spots, we found that a parallel option is a minus 17, like a truckers lay-by, where you don’t have to defend anything and there’s no attention from the world). This is where nomads get their cups re-filled.

…so the idea of having a centre which is fixed on the earth has always brought that feeling of decay with it, at least to me.

I guess this Blog Entry has now broke the world record of words per post so I must let it be, but we will come back to this.