As you may know, alongside making yurts and other tents and supplying replacement yurt covers for a big chunk of the UK campsite industry, we also are looking to create a sort of multi-use site in the centre of Italy, yes juggling many balls may be demanding at times,

Lately we have had a short break from making yurt covers that has allowed us to focus on a model for repopulating rural villages in southern Europe.

We are now working on the creation of a cultural association called Heartland (like the site we are building), whose aims are to promote eco-tourism, organic agricultural and low impact ways of building, as ways to repopulate the abandoned lands of southern Europe. 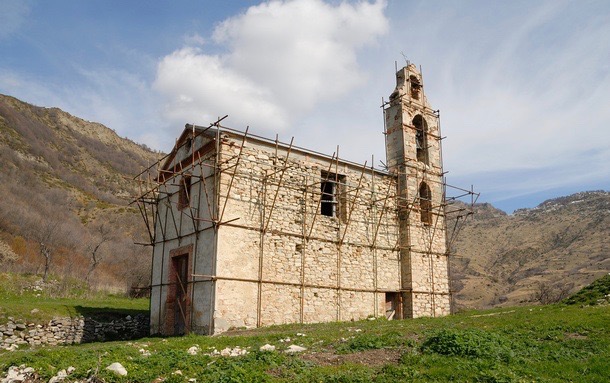 The abandoned church of Valley Piola

In Italy there has been a very strong trend of rural depopulation: whole villages on the Apennines are now empty, one example is valley Piola now for sale as a whole village and in other places, you can be given an old house for free if you agree to renovate it. The historic centres of quite a few villages in south Italy are drawing investors that way.

We felt that we want to find a way to give something back to the region of Abruzzo and the best thing we can focus on, is to help this amazing region to introduce systems of sustainable tourism and green building legislation. Italy, as a whole, is still behind Northern Europe when it comes to the green tourism wave: yurt campsites, holidays on working farms, low impact building etc., even though the Italians love going on holiday and have lots of it.

Anyway we are getting off track here, the issue is that many places in southern Europe have become depopulated, due to economic issues (mainly), a change in life style and the hardship of mountain living and agriculture –  the village contracts inwards so to speak, the land furthest from the village core, at times become totally abandoned, the dirt roads fall into disuse.

The model we are developing currently is one in which those lands which are furthest from the village get developed as a sort of green belt, – we realise that the fact the village contracted inwards, (meaning that most people from the surrounding countryside now live inside the village), means that change in the centre is hardest. The Italian village is like a fortress. In the mountains it usually has a very strong identity, people still mill around until late at night in summer, sitting on benches and having coffee. It is hard to bring change to local communes – the village people are welcoming of course (it’s Italy after all), but the strong identity of who they are also serves to inhibit change, the traditional way which is so attractive, serves to keep things as they were.

So instead we are focusing on developing the furthest reaches of rural communes in the mountain region where we want to create the Heartland centre as the place where new movement will come from. 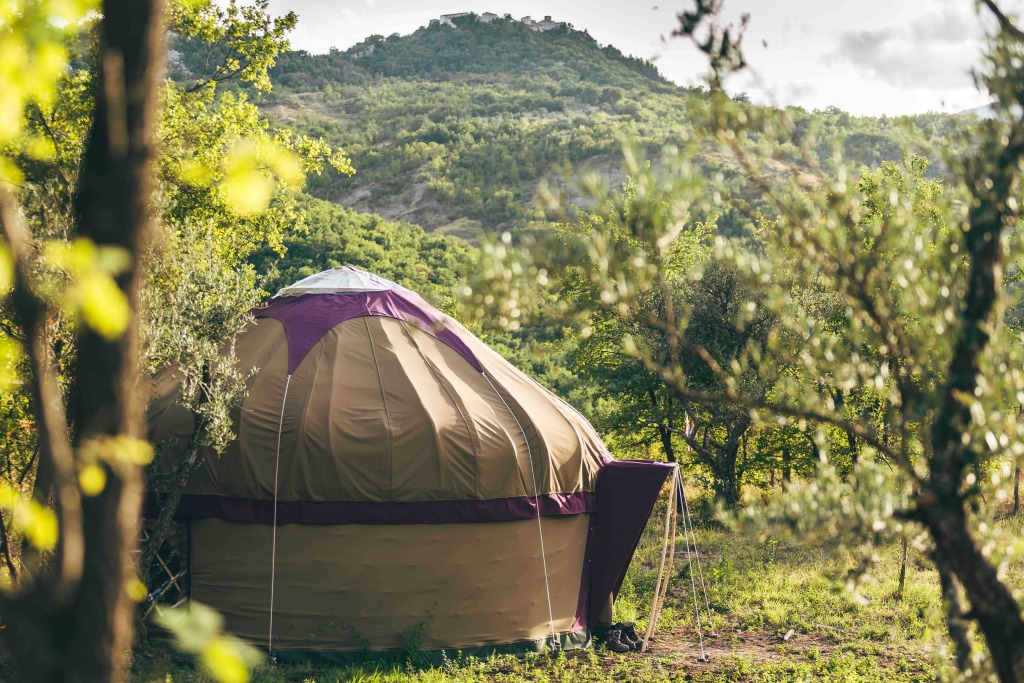 The focus is on creating an eco-centre in each commune, it could be a green tourist attraction, a small yurt village or maybe an organic farm where you can stay, maybe a place that studies new organic farming methods one that can be implemented in the fields of the old farmers, crops like giant bamboo, truffle growing, ancient grains.

Or it could be a small mobile saw mill focusing on km zero production in this region where massive mountains oaks grow wild. The only forestry the locals know is called firewood. Anyway you get the point, endowed lands gets developed into a green zone, that serves as some sort of responsible and ecological attraction. 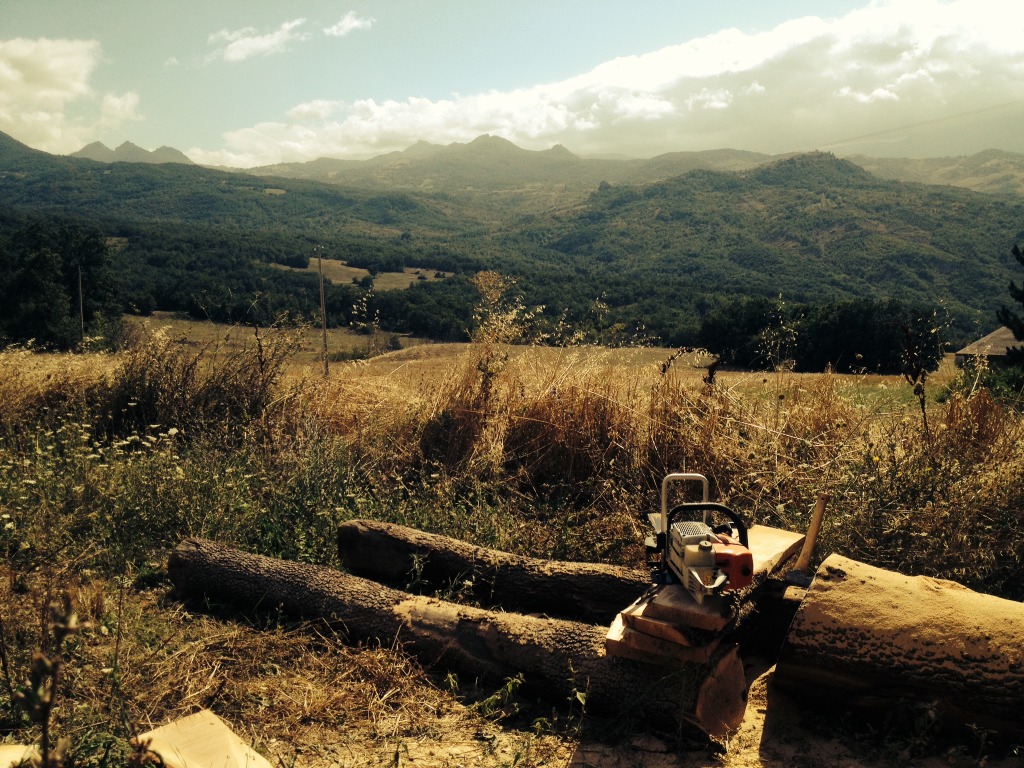 Next we are looking to the Region to establish new laws to help green building and low impact structures to be built in that green zone, with the hope to attract those green operators: the people that will come like pioneers to dig the ancient hills and plow it into an organic paradise will get an incentive The back-to-the-land movement is strong, if a bit under publicised, in Italy.

There has been so much in the area – growing ancient varieties of grain, fruit and vegetables, there is so much nature, amazing mountains, in fact Abruzzo has more national parks than almost anywhere else in Europe, walks between caves in the mountains, wild life to dream of, but yet it is still falling into abandonment. It is amazing, because, being specialists in alternative tourism and professional campsite builders, we feel we are able to help this region take a leap into a sustainable future, away from creating hotels on the mountain and paved walking paths. We envisage more old stone houses becoming Alberghi Difusi, yurts serving as small places to stay, safari tents as places to holiday on working organic farms, small dirt roads that lead from one small mountain municipality are tied together green area to neighbouring green area, what a dream right?!!.

There is a lot of work to do that is for sure, but it’s nice seeing the first seeds starting to grow, people coming to the region in a responsible manner, no more of selling whole villages to some foreign investors. Rural communities need to maintain their identity not to sell their soul, if you too are looking to help the sustainable future of southern Europe we urge you to get involved, thinking about having your own campsite?, your own little bit of paradise where you grow organic produce? The situation in a lot of rural Southern Europe is similar to that in Abruzzo, Italy.

Little by little we see how our small area of activity has already made a difference, our centre building is already forming new relationships, already bringing energy and people to an abandoned area, and its amazing to realise that the whole side of the local hill would turn back into jungle if it wasn’t for our efforts, to know the olives are cut again, the wells are all clean, to know that the thousand year old road is now being resurfaced by us in conjunction with the local commune. It feels good to be able to make a difference and help those mountain people of southern Europe come back to their roots in a new people, a new generation of green mountain people. 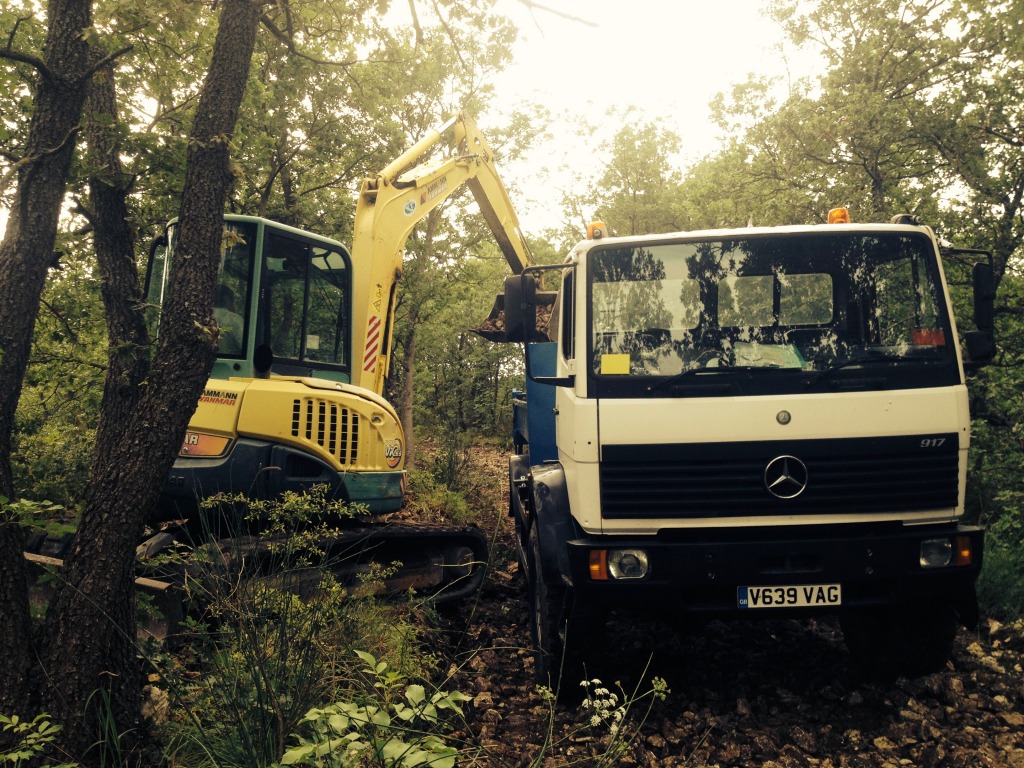 If all of this speaks to you too feel free to contact us, you can also become a member of the Heartland Association or subscribe to the mailing list (button at bottom of page) to keep abreast of new development of the association and our tent making activity.

Yes, to most tent people, the idea of acrylic canvas, sounds strange and unnatural, on these beautiful, traditional nomadic structures. But, the truth is, of course, that to make cotton and polycotton able to withstand the elements in a European climate, various chemical products need to be applied. Don’t worry, all have passed safety tests.

If you have lived in or worked with canvas, you are well aware of the black spot mould which appears and the inevitable deterioration of the fabric. We recommend, every year, to clean the canvas with a soft brush and mild detergent and then to reproof the canvas with a reproofing solution (we can supply a paint-on FWR (flame, water and rot-proofed) solution). Acrylic canvas, however, doesn’t rot.

8 years ago we made this yurt cover for Tithe Farm B&B in Lincolnshire, England. They chose to have acrylic canvas, rather than the usual cotton canvas we were working with at that time, for longevity.

After standing outside for 8 years in Britain (to quote Biff Vernon, the yurt owner): “The fabric is still completely waterproof. The only problem we had was that where the six ropes that hold the top star down rub on the canvas at the roof/wall angle little holes have been worn. We stuck patches on with fabric glue to reinforce these and wrapped the ropes in a fabric sleeve to reduce the pressure. That might be less of a problem with curved roof poles but ours are straight so there’s quite a sharp angle”. (This issue can be prevented by threading a small piece of clear plastic hosepipe onto the star ropes, to sit on this shoulder of the roof rafter).

(Guess which is new and which is 8 years later). 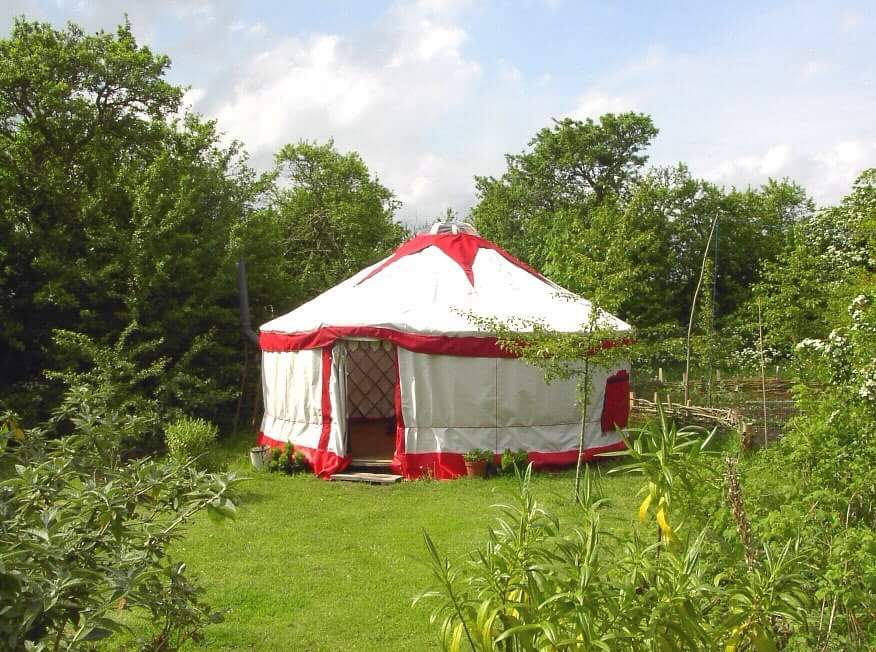 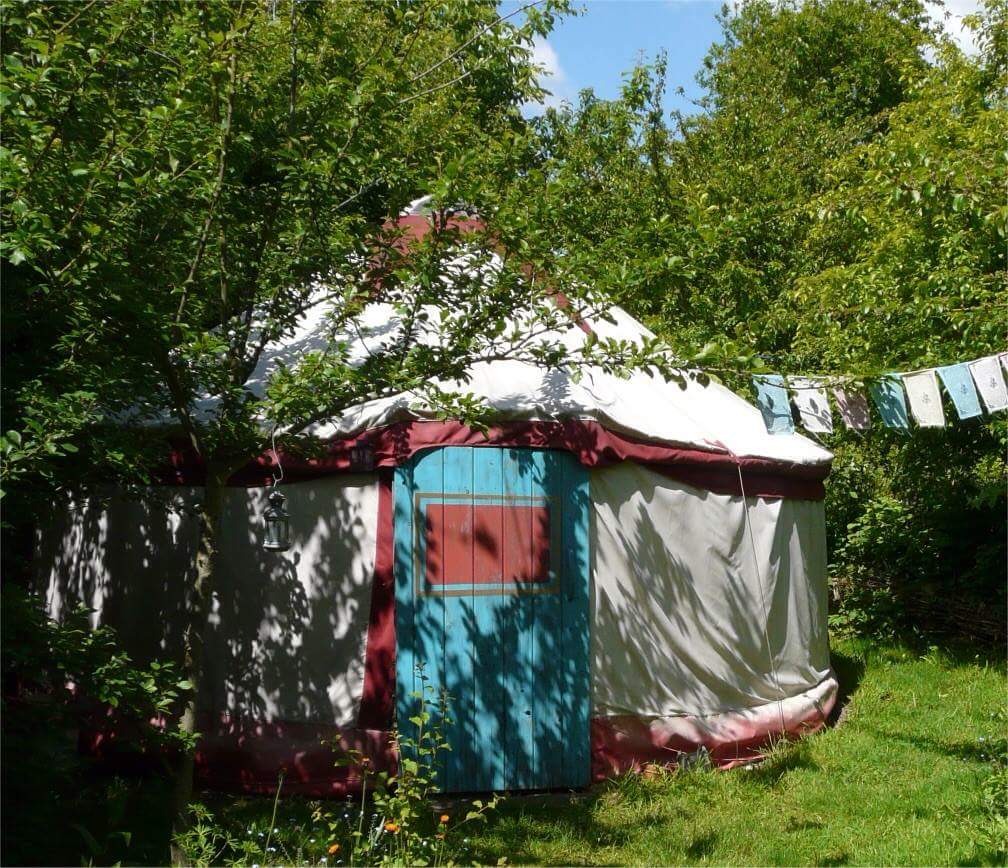 A more natural fabric like cotton or even polycotton would have well perished long ago in these conditions. The synthetic fabrics are woven and look very much the polycotton, only hang a bit more stiffly.

And here is the lovely little wedding pavilion at Cornish Tipi Holidays which we made 7 years ago, which we have heard, is still fine, only a bit ‘not perfect and wedding’. 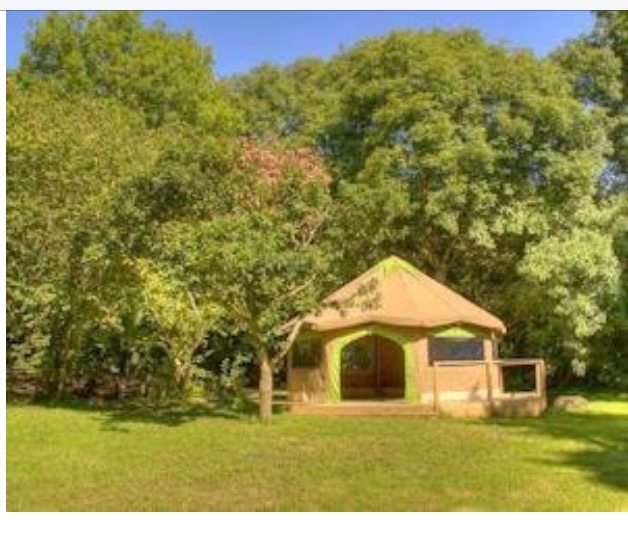 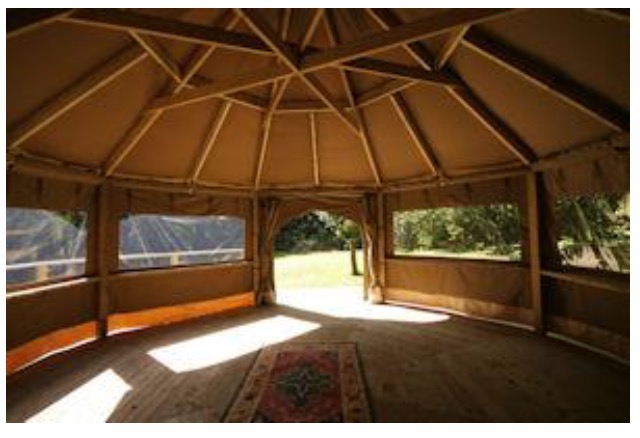 These fabrics were PU coated, but we are now working with a FWR (flame, water and rot-proofed), fabric in which the proofing is in the fibres themselves, so is permanent, and can’t be removed.

Acrylic canvas is expensive, and not for everyone, but weighing up all the odds and external conditions, may be worth the investment, especially for a more upmarket look.