Winter has finally come around and although it is  our busier time of the year, I took a moment to lay in some garden beds for the next season, at our land in Italy. The weather has been amazingly sunny and warm: we seem to have endless string of sunny days, and the little dusting of snow we had just adds to the beauty of it all. The mountain is majestic and it is so good to be outside all day long in the sun – we are even sweating  most days.

We decided to take a moment break (well I did) and make some raised garden beds. There is an old method that used to be practiced in Eastern Europe and Germany for decades – it is called Hügelkultur, and it calls for burying wood under earth, and layering to create compost, which ensures constant moisture to the bed. It is said that this method can be used in the desert and would not need watering if done right so I thought well we should give it a go, as we sure did water our garden last year in the hot, dry summer.

We have dug a wide long trench. This was quite easy as we used our digger instead of having to do the work by hand and the ground is nice and dry. The commotion drew the neighbouring farmer so we used the opportunity to have him deliver some horse manure.

First step was to fill the dug section with logs and as we have just been clearing the old orchards, there was quite a supply of weeping elms.

Filling the trench with logs

The logs were covered in earth and we piled some straw out of an old straw bale that came from another neighbouring farmer, it seemed it was all just flowing, whenever the next layer was needed someone would happen to be driving along and come and deliver it. 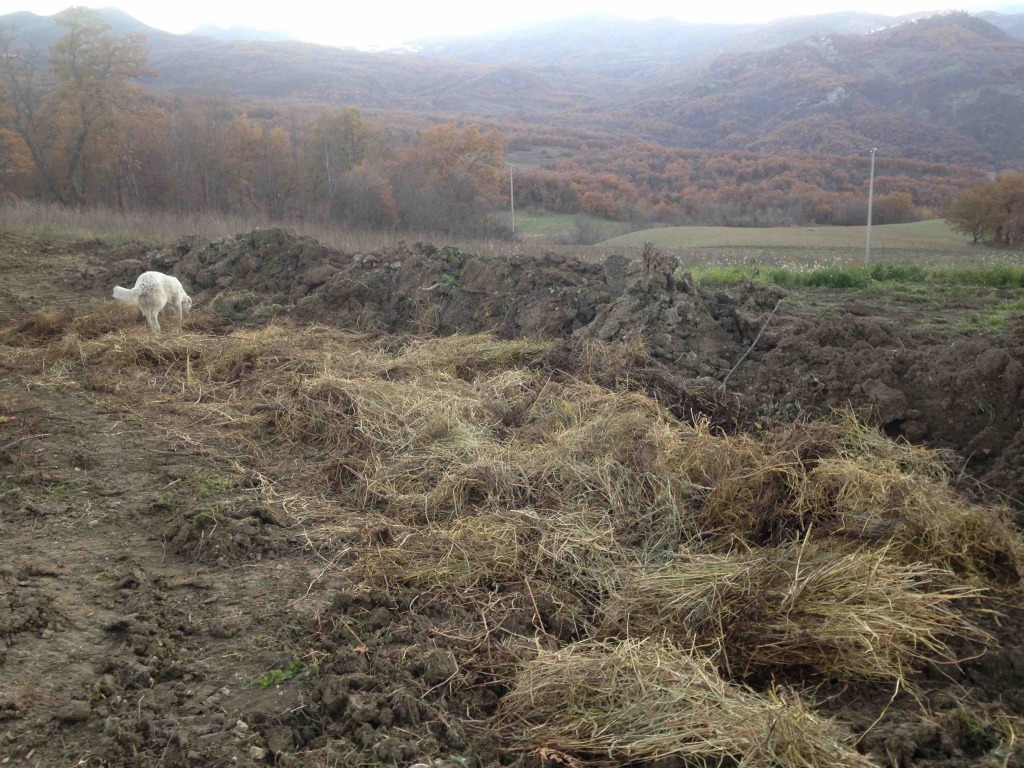 The best thing about the straw bales is that they need to be really old or one has to go through a process of maturing them, and the good thing was that the old farmer that came to pick the bales for his horse, was picking up last years bales and some have got in a bad way or might I say, they ended up in a raised bed.

As we were rather rich in horse manure we thought we would lay one layer of that afterwards to help the composting process. The whole Idea of the process except for its compost quality is that once the wood rots, its acts more and more like a sponge collecting water when the earth is wet, and delivering it back slowly once it dries up, or in another sense, as I was telling the local farmers who could not really believe I was burying my wood pile in a nice clear field, it’s a method for having a garden without the need to water it. 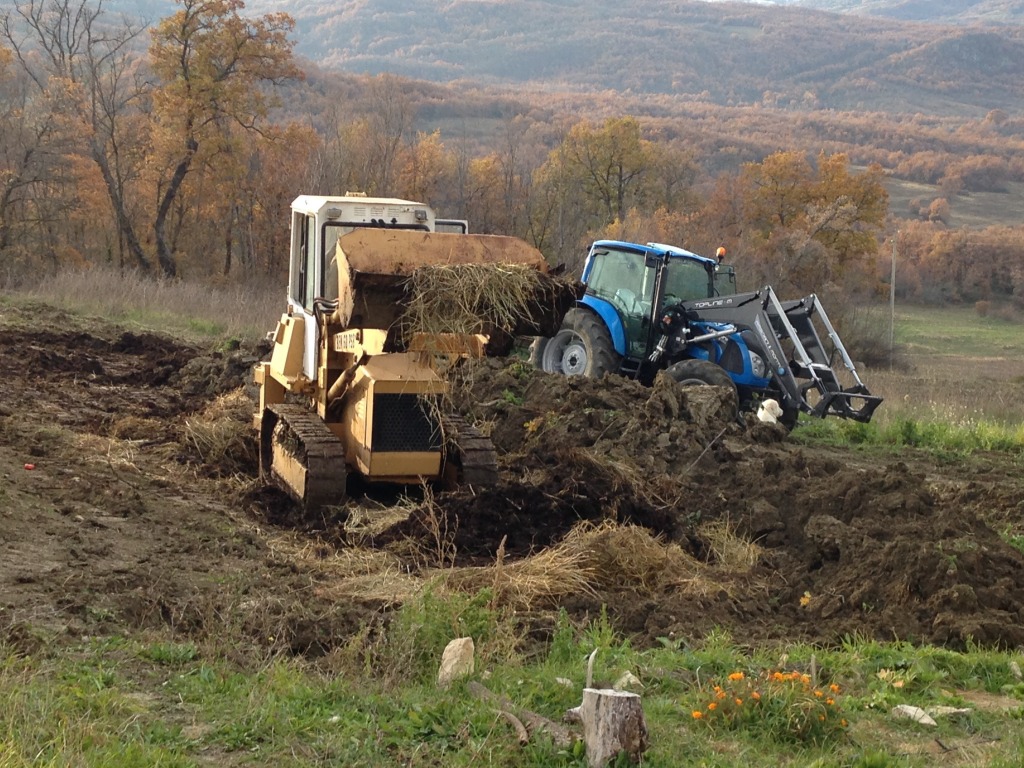 As things were in swing and all the local farmers seem to be out and about in our parts, I thought maybe we can kill two birds with one stone, and got one of them to come with us to pick up some of the olive branches of the olives we just pruned. These olives have been neglected for 10 or so years, and there was a surprising amount, and i thought great that would be another nice layer for the raised bed. Back in the day Olive wood was quite sacred, and its amazing smell when burnt made feel like a sacrilege to just throw it in the ground, but somehow we managed. 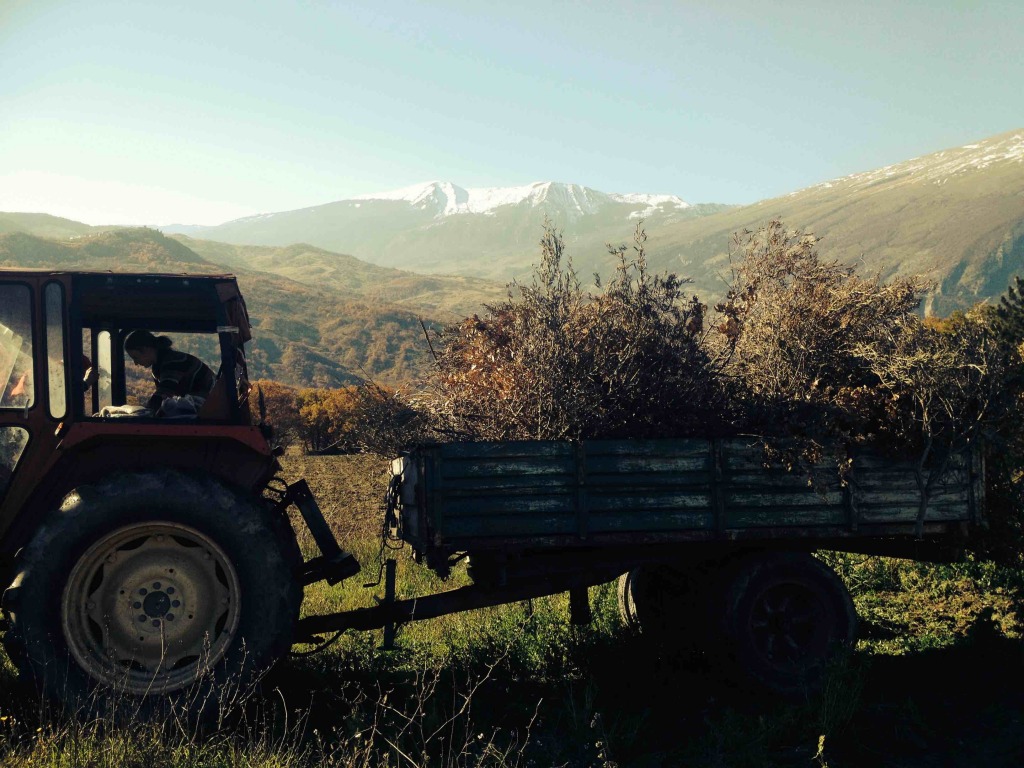 To top it all up we have put the remaining earth, another load of horse manure, and another whole straw bale, seeing that no manual digging was involved I was rather pleased with the speed it all came together, and it was nice education for us and the local farmers, who promised that if my gardening experiments work they would make their own garden the same way.

The bed is raised!

It felt funny teaching them how to garden, like selling snow to eskimos, but in a way it is time for new ways to take place, and as the Italian country side is suffering from the lack of governmental reforms more than most and the old day farming methods seems to have been swapped to simply plowing in grain once a year, I guess it is a turn for the good. It sure felt like it was flowing and I hope the abandoned lands and olive groves would flourish again at the foothills of the Magellan. The locals seem to have put a little more effort than usual this year into their fields and I hope we helped in some way to revive the abandoned fields and get the locals to not abandon their plots.