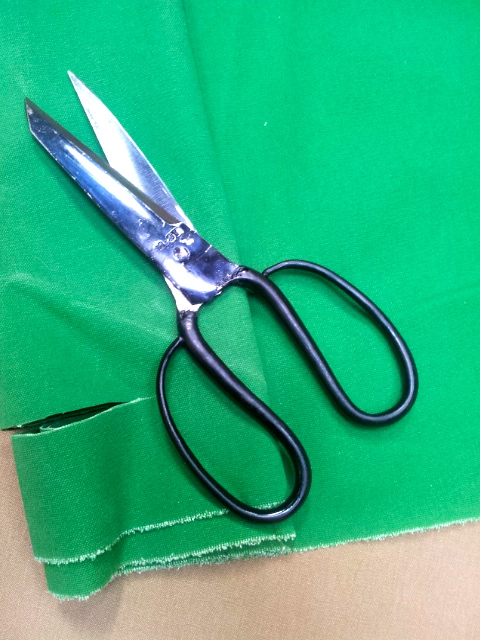 Last year, when The Angel was first was with us, in the Harz mountains in Germany, she introduced us to a new level in knives and scissors. As tent makers, we spend a lot of time on our hands and knees cutting canvas, and have tried various electonic cutting devices, but, without fancy cutting tables, and often working outside, in the end a good ole’ pair of scissors seems to be the best tool for the job. These superior scissors she brought, could cut through more than 12!!! layers of 12oz canvas, and glide through a single layer, making the job so much easier. 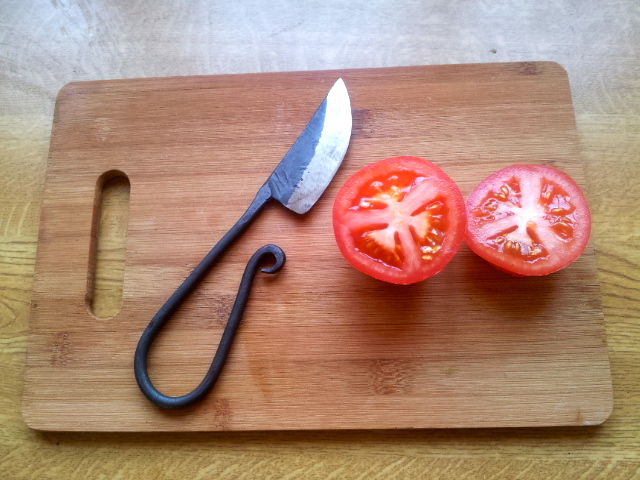 The medieval knife resting after a clean tomato cut

And then the knives: we usually use an Opinel knife for everything from chopping tomatoes, to carving spoons, even though we have made our own knives from old circular saw blades, and of course, there was the ‘crooked knife’ for carving which Bill Coperthwaite raves about…. but, these knives she introduced us to, are carbon steel so are super thin, light and mega-sharp and thus make many kitchen jobs much simpler.  Like the scissors, I had accepted a certain level of tool as ‘good enough’ but then discovered the level beyond ‘good enough’.

Then there was the day when, I was looking at the mid-summer growth of grass and nettles, and wondering if we should do something about it, but not having a lawn mower or green machine, it turned into a not-doing, with tiny clippers. But later in the day the good-looking postman brought a package with a new load of these knives, with a traditional-looking set of garden shears. Just the job, although decided to leave the nettle forest as it was, growing so wild and beautiful. 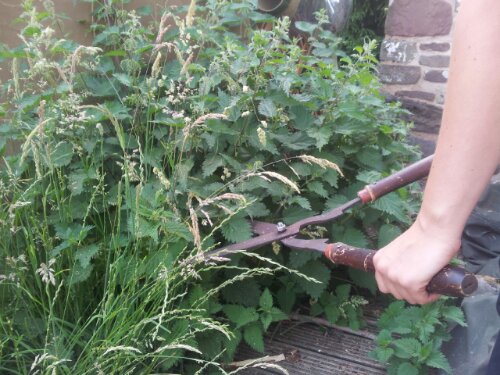 About to cut the nettles

These blades are made by several families of traditional blacksmiths in North Vietnam, in a tradition that has been intact for many generations. Recently the small family forges have met with difficulties, as cheap rolled steel-products made in China flood their local market. The Angel has recently started developing our Wild Canvas brand of products and is selling these Authentic Blades alongside the wild bushcrafty things.

I recently read a book which had a good model for the group body. The book is ‘Singularity’s Ring’ by Paul Melko, a science fiction novel set in a future Earth, where most humans exist as genetically engineered ‘pods’, which are made up of groups of 2 to 5 individuals. Each pod is an individual unit and is known by the pod name, only the members of the pod refer to each other by their separate names, which sometimes reflect their power and role in the pod. So for example, in the 5-pod, Apollo Papadopulos, who is the main character of the book, Manuel is the ‘hands’ who does the practical things, and Quant (a girl!), is the mathematician who does the calculations.

The individuals of the pod can operate independently to some extent, but are a true, complete unit, when together, and can share knowledge and experiences through non-verbal communication, so it is enough for one of them to know something, for them all to know it. They operate a consensual decision-making process, which is a certain ‘smell’ achieved, when they hold hands, touching together their ‘receptors’ on their wrists.

We introduced our experience with the group mind/body in an earlier post, as the tribal godhead, which comes into being through the coming together of a group of individuals. When I was writing this post, I was searching the net for pictures of 5 people holding hands as an illustration of this pod, and didn’t really come up with much, but that evening, watched a movie called ‘V for Vendetta’, (the one with the Guy Fawkes masks and Natalie Portman getting her head shaved). The curious things was that in the movie there was a statue of 5 people holding hands in a circle, and then if you go deeper, there are loads of coded references to the number 5: V being the Roman numeral for 5, Guy Fawkes day being the 5th of November, Beethoven’s 5th symphony and many others.

5 was being highlighted by the abstract force.

The more we give up our individual selves to the larger body, the more this ‘pod’ comes into being, its force being more than the sum of its parts. These sort of alignments, where the story talks, become everyday events, and the things we call ‘coincidences’ are expected occurrences.

And then this poem came into the focus…

The conditions of the solitary bird are five:
the first, that it flies to the highest place;
the second, that it does not suffer for company, not even of its own kind;
the third, that it aims its beak to the skies;
the fourth, that it does not have a definite color;
the fifth, that it sings very softly.

A little while ago we said we would look into the myth of the white horse and its manifestation in our group work, I guess it is one of our personal Myths.

As we tried to explain before here, there is a group formation model, that consists of a few men and women, a group that acts as one greater being. We call it the group body, or sometimes the group mind.

Our own story in relation to group work started in the summer of “96 in a festival that took place in the mountains of Portugal, meant to be a month long affair, but ended up lasting more than three months.

Not only did we meet group consciousness work, on that mountain range there lived a few herds of semi-wild horses; the gathering site itself had a herd of brown mares with one splendid white stallion. 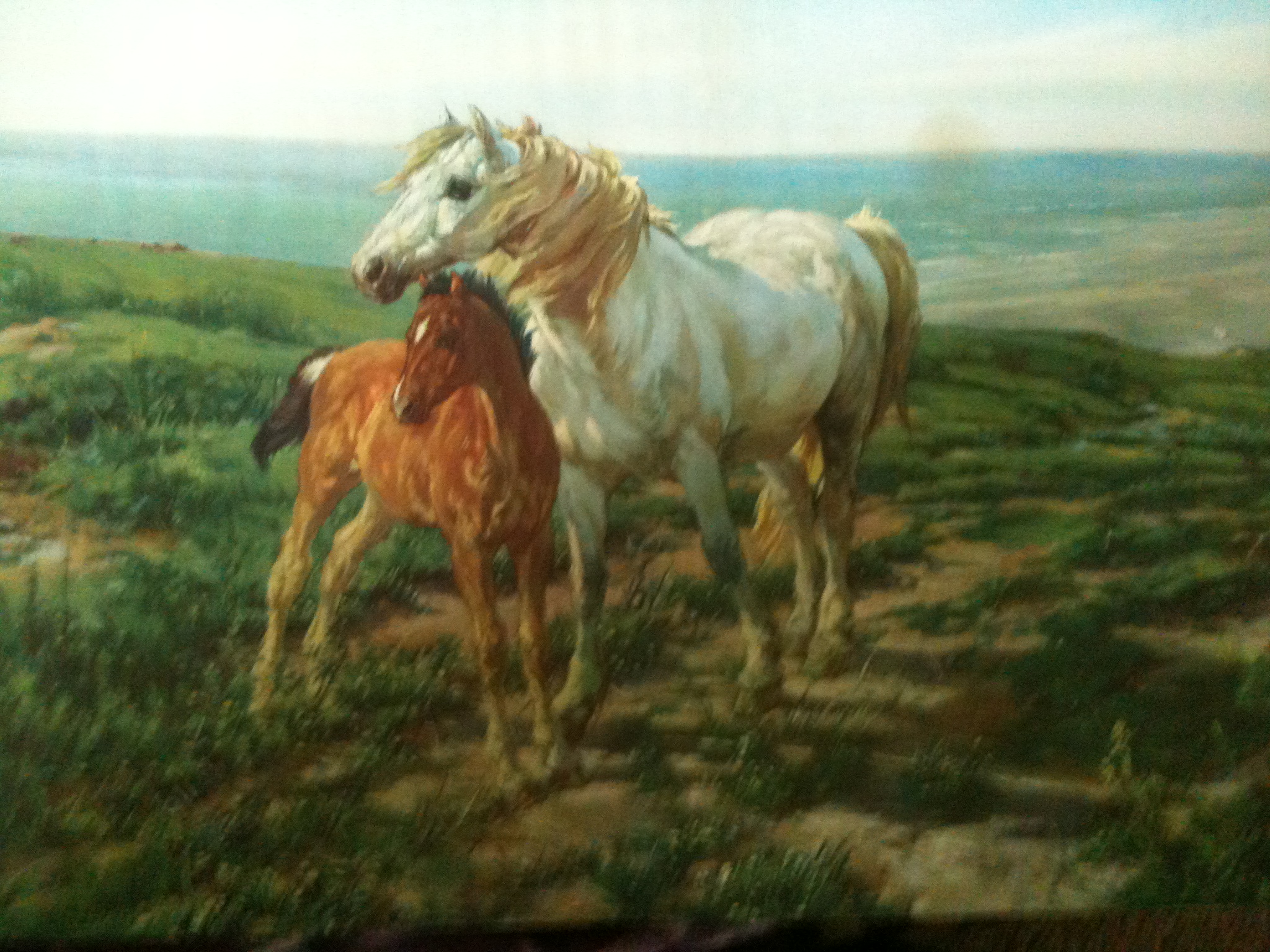 The White horse in the mountains of Portugal

I remember we used to have our morning service circle in the medicine area and the white stallion would come and stand a few metres away looking at us. I guess from the beginning, group work was imprinted with a pure white stallion (for us anyways), as you will see that white horse became a kind of story-teller of our  particular group blueprint.

7 years later, some of the people who met in those mountains in Portugal were now living in a meadow in the Pyrenees in France. The group was facing a new cycle, as a few months earlier we all went back to the same site in Portugal to recall what is was all about, to re-align our intent.

But in the end, of that re-alignment the group kind of collapsed. It became clear that group work needs a stronger basis and that it could not be family orientated, because of inherited flaws and inter-dependencies.

So here we were in France a few months later (some of the survivors). One morning I went to visit the Scholar, (one of the men). Whilst sitting in his van, speaking about one of the women (as men do), two horses wandered by; one was brown and had a bridle, the other white with brown patches seemed somewhat wild.

The Scholar said, “Let’s go and catch them and ride together”. I said, “There’s no way we will manage to catch up to these two”, so he opened his truck door, picked up a carrot from his food box, and off he goes by himself.  Twenty minutes later he comes back riding the brown (bridled) horse, with the white one walking alongside. I could not believe that he managed to get them, though he was one carrot short.

But when he came to where I was standing he did not stop. I walk on with him and the horses; the brown one ignores me but the white one comes straight at me and then it starts following me, instead of walking with the other horse.

The Scholar goes over to one of the girls, she steps out of her caravan (sounds gypsy?), he jumps off and she jumps on, she then asks me for a lead, rides the horse for a while, until the horse gets jumpy and rears; trying to kick the one that has been following me all along, the white one with the mad eyes.

Somehow we felt like there was more than just a usual interaction here, in retrospect it turned out to be a true hunch, it was a map.

The Scholar found another path, one that he could harness (symbolised by the brown horse) and the woman too took that path for a while, then reared up (had a little drama) and became a Buddhist nun a path not so un-similar to his initial, so you could say the horses foretold that those two are going another way and that we are going another, symbolised by the white horse.

The horses represented two modes – the Dreaming and Stalking, guess which was the white one? 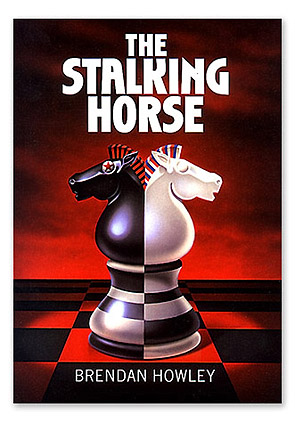 It does not end here, another 3 years went by and we found ourselves gathering a new group.

Whilst in Italy, again in trucks, we found this amazing valley, it too had a  herd of wild horses which was led by a white stallion. We thought that our dreams had come true, then one morning I was speaking to one of the girls and the white stallion came and stood on the ledge right above us looking into the truck, I felt like the story has come for me, this must be our place (we were looking).

A few days later, we found an old mill we thought we should buy, to turn into a centre for group work.

Next night another one of the girls had a dream, where she met the heart of the world and lost it. In the dream she was literally overlooking the Mill (remember the Mill that grinds the ages?) and speaking to a being who was the Heart of the World (but looked like a door) but then it left her going east towards some mountains.

The next morning she was telling me that dream, we were standing outside, at the exact same spot where the dream took place – overlooking the Mill. Just then, out of nowhere a 4×4 truck comes up towing the lead stallion on a rope, the very same free stallion that had been roaming that valley for some 7 years. It was an omen, the leader has been caught, the group lost its freedom. Funny thing was that it appeared just as she told me the bit about losing the Heart of the World.

Then as it passed us the truck stopped, the stallion was rolling on the road kicking, the rope was strangling it, then as if in a dream, a car stopped and an Italian guy (it is Italy after all) jumps out, wearing a Horse medallion on his neck, and takes the rope off the horse’s neck and ties it as a bridle, the truck drives east down the road (same direction as the heart of the world went). 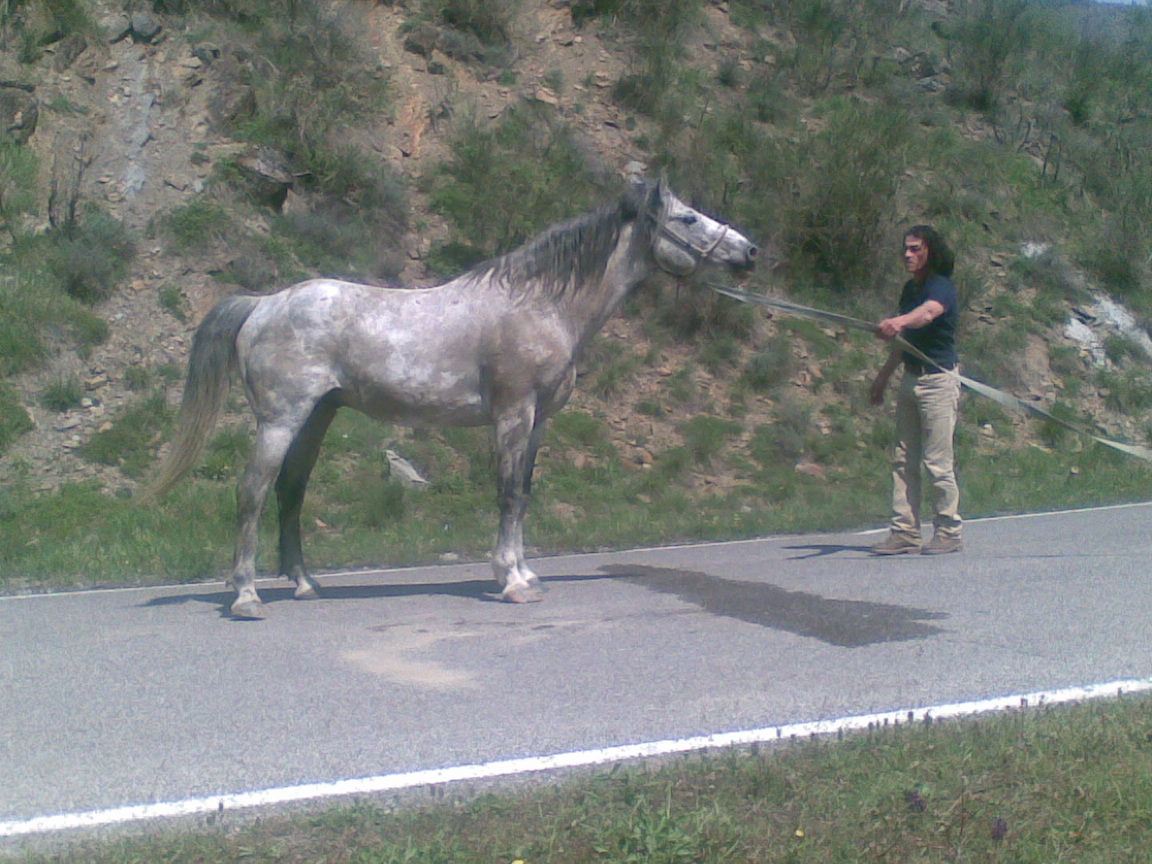 This was how the white horse was caught, we felt like our story itself was caught.

The story does not end here, but as this post has become epic, so it will have to be followed by another.